Disheartening with recent initiatives for cutting down the trees, members made human chains around the standing peepal trees and requested the visiting field officials of the State government not to fell down the trees at any cost. 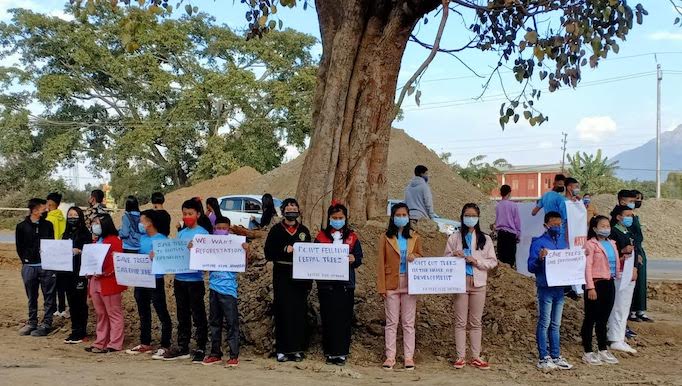 Imphal: Members and well-wishers of Nature Club, Haoreibi organised a protest rally Wednesday at Canchipur here against the proposed felling down of aged-old 13 peepal (Sana-khongnang) trees (including many other matured trees) growing on the roadside between Canchipur MU gate and Lilong bridge as a part of the road expansion project of Imphal to Moreh.

Disheartening with recent initiatives for cutting down the trees, members made human chains around the standing peepal trees and requested visiting field officials of the State Forest Department and PWD, Govt. of Manipur not to fell down the trees at any cost.

Members of Manipur University Students’ Union (MUSU) and Youths for Protection of Human Rights (YPHR) also joined the protest rally organized by Nature Club as a solidarity for the cause.

Later on, joint re-survey of the standing trees was carried out by the officials of PWD and Forest Depts. in the presence of Nature Club, Haoreibi.

A copy of the memorandum submitted earlier to the Principal Chief Conservator of Forest, Govt. of Manipur and Chief Engineer PWD, Govt. of Manipur in connection with the same is enclosed for your kind perusal, said a statement issued by the Club.