Nagaland: Chuba Chang to contest in PDA ticket for by-poll

Chief Minister Neiphiu Rio described the PDA as one cohesive unit, determined to work together to win the by-election and even in the days to come. 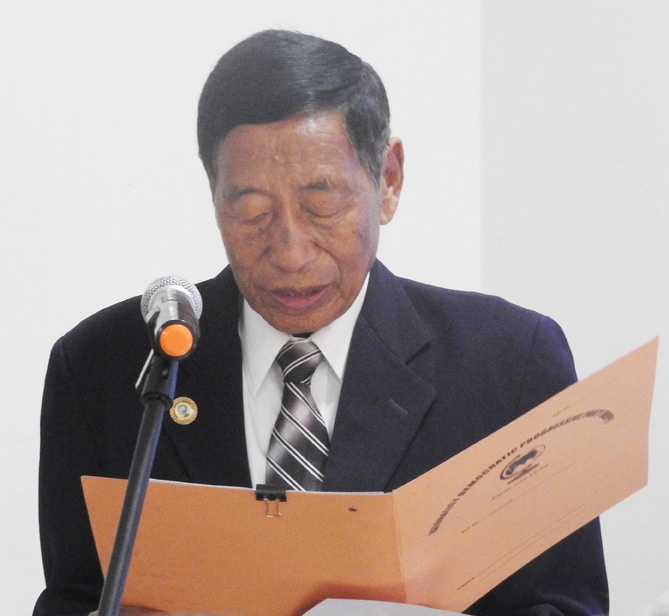 Kohima: Former Nagaland Minister H Chuba Chang was selected as the candidate of the Nationalist Democratic Progressive Party (NDPP) ticket to contest the by-election to the Noksen Assembly Constituency and as consensus candidate for the ruling People’s Democratic Alliance (PDA).

According to party sources H. Chuba Chang, a four-time Congress MLA from Tuensang, he was also the consensus candidate for the ruling PDA, was handed the ticket at a ceremony held at the NDPP office at 7th Mile in Dimapur yesterday. The function was well attended by leaders of the alliance, including Chief Minister Neiphiu Rio, Deputy Chief Minister Y Patton and top party functionaries from the NDPP and BJP. Chang, while expressing his gratitude to the PDA leadership for reposing faith in him, assured of giving his best for the people.

Chief Minister Neiphiu Rio described the PDA as one cohesive unit, determined to work together to win the by-election and even in the days to come. He said that by-election would bring unity under the banner of NDPP-BJP alliance not only in the constituency, but also in the state, at the same time, while keeping in mind the Naga people’s desire for an honourable settlement of the Naga political issue. Rio was optimistic that the former minister and civil servant would win the Noksen AC by-election by a thumping majority. Mentioning that Congress would not be fielding any candidature to the by-election as announced, Rio said NDPP would request Naga Peoples Front to not field any candidate for the sake of Naga issue by working united for its early solution.

Nagaland BJP President and PDA Co-Chairperson Temjem Imna Along, who is also the Minister for Higher & Technical Education & Tribal Affairs, said that the BJP stands with the same degree of commitment to the NDPP-BJP alliance. According to him, BJP has no other agenda than to work for a collective PDA win.

After receiving the ticket, Chuba acknowledged both NDPP and BJP for trusting him and assured to work to the best of his ability in accordance with the motto of NDPP, “Facta non Verba.”

The Noksen seat fell vacant following the demise of Chongshen Mongkosungkum Chang, who was the Minister for Environment, Forest & Climate Change and Justice and Law on October 12 last year. The bye-election to the seat will be held on April 17.