Mehbooba alleges ED forced her to sign statement during questioning

She alleged that despite her reluctance she was forced to sign a statement which is recorded in the CCTV footage during her questioning. 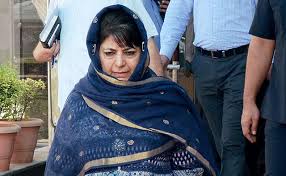 Srinagar: Former Chief Minister Mehbooba Mufti has alleged that she was forced to sign a statement by the Enforcement Directorate (ED) during her questioning in connection with a money laundering case.

The Peoples Democratic Party (PDP) president Mehbooba was questioned by the ED in Srinagar on Thursday for about six hours.

She alleged that despite her reluctance she was forced to sign a statement which is recorded in the CCTV footage during her questioning.

Taking to micro blogging site Twitter, the Vice Chairperson of the Peoples Alliance for Gupkar Declaration (PAGD) Mehbooba said “ Finally despite my reluctance, I was forced to sign a statement which is evident from the CCTV footage of my questioning”.

“To set the record straight, during the course of my questioning at ED, right from the start I insisted on not signing any statements till I consulted my lawyers. But I was shown rule books & told that not signing would have consequences”, she further tweeted.

Immediately after her questioning was over by ED on Thursday, Mehbooba alleged that different agencies, including NIA, ED, CBI are ruling the country. These agencies are targeting anyone who raises a voice against the government, she alleged and said dissent has been criminalized. She said her fight against the restoration of Article 370 and resolution of the Kashmir issue peacefully would continue.

Share
Facebook
Twitter
WhatsApp
Telegram
Linkedin
Pinterest
Email
ReddIt
Previous articleSuccess of Tripura police: Another NLFT leader surrenders fleeing from Bangladesh camp
Next articleDifficult for anyone to fill in shoes of my father as CM; but CM will be from Congress: Gaurav Gogoi
- Advertisement -