Meanwhile, a team of police headed by a woman police officer in-charge of Jowai police station is investigating the incident. 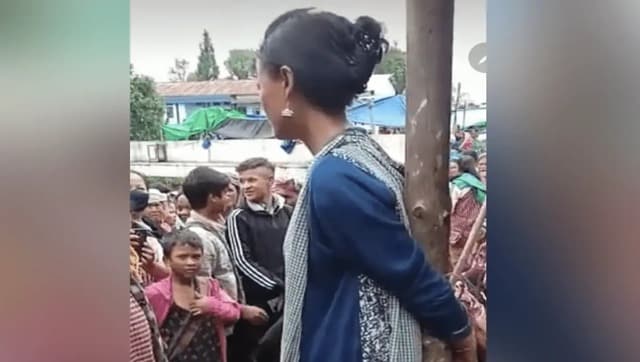 Shillong: The Meghalaya State Women’s Commission (MSWC) has directed the State police to take suo moto cognisance in a disturbing incident where a woman was allegedly tied to a pole at a market place in Jowai, the district headquarters of West Jaintia Hills on charge of being a pickpocket.

A video of the incident went viral across the state on Friday, prompting Jowai Police to swing into action and begin investigation. The video, whose authenticity could not be verified, shows the woman being taken to a shed by unidentified persons for questioning after which she was tied to a pole amidst jeering by a crowd.

“We at the MSWC has taken up the matter with the police and directed to take suo moto cognisance of the incident since the people have taken the law into their hands instead of handing over the woman to the police. The police have assured that action will be taken against it,” MSWC Chairperson, Phidalia Toi told UNI by phone on Saturday.

Terming the disturbing incident as “unacceptable” in any civilised society, Toi said the Commission has asked the victim to lodge an FIR with the police against those people who had shamed her in public.

“However, the victim has refused to do so and therefore we have directed the police to take suo moto cognisance into the matter. We have already started counselling the victim,” the Chairperson said.

“There are allegations against the woman that she is a habitual thief but those people who caught her red-handed for stealing should have immediately handed her over to the police for action as per the law of the land. But in this case the woman who was accused of stealing has become a victim,” Toi said.

Meanwhile, a team of police headed by a woman police officer in-charge of Jowai police station is investigating the incident.

“The investigating team has already summoned the witnesses of the incident. We have already recorded the statements of some people. Once the investigating team submits its reports we will take action as per the law of land,” Bikram D Marak, the police chief of West Jaintia hills said.