The 78-foot tall dome of the under-construction State Assembly building in the New Shillong Satellite Township on Sunday collapsed apparently due to faulty design. 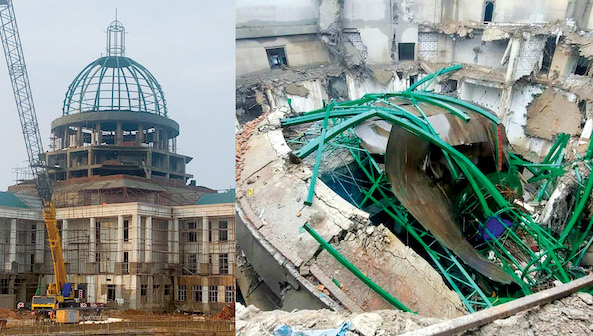 Shillong: Several political parties and pressure groups in Meghalaya are either demanding for a CBI or an independent probe to unearth the reason behind the collapse of a 78-foot tall dome of the under-construction State Assembly building in the New Shillong Satellite Township on Sunday apparently due to faulty design.

The BJP, which is an ally in the ruling National People’s Party-led Meghalaya Democratic Alliance (MDA) government, along with the opposition Congress on Monday demanded for an independent probe and to place PWD Executive Engineer Ransom Sutnga under suspension from his post.

“We will soon write to the Lok Sabha Speaker Om Birla informing about the collapse of the assembly dome due to shoddy construction and then to Home Minister Amit Shah to urge him to institute a CBI probe to unearth facts behind the incident,” State BJP president, Ernest Mawrie told UNI over phone.

“Just because we are part and parcel of the MDA (Meghalaya Democratic Alliance) government, it doesn’t mean that the BJP will turn a blind eye to corruption of the government. We at the BJP wants to ensure a free-corrupt government and to be accountable to the people of the State,” Mawrie said and demanded scrapping all infrastructural projects awarded to Uttar Pradesh-based Rajkiya Nirman Ltd (RNL) in the state and take stern action against those involved in the shoddy construction of the Assembly building.

On the other hand, the opposition Congress claimed that the collapse of the dome was only a “tip of the iceberg of the rot that lies beneath the willy nilly functioning of the ruling National People’s Party (NPP)-led government” and demanded for an immediate independent inquiry.

“The collapsing of the dome cast serious doubts about the real intentions of the government and the officers who are tasked to carry out infrastructure and other projects. In fact, the people of the State must thank the rain Gods for helping expose the pathetic quality of work in government projects which has been okayed by the present government to contractors of questionable repute,” State Congress Working President, P. N. Syiem said.

The veteran Congress leader said the revelations of the poor quality of work in government projects have left the Deputy Chief Minister Prestone Tynsong and the Executive Engineer of PWD, (Building) Ransom Sutnga with no other choice but to play shifting the buck game or find lame excuses.

“As per the tender’s clause, there was no such  provision of providing a subcontract to another firm, but it is evident that the qualifying firm, RNL, had provided a subcontract for the construction work to BRC Ltd., a construction-based company in Assam. The firm, which has no such experience in building dome structure, was executing the work,” Syiem said.

The Executive Engineer is “allowing poor quality construction and unprofessional execution of work, maybe he is too busy pleasing his political masters and building up his own political career,” the Congress leader claimed.

Apart from Sutgna’s suspension, Congress also demanded independent legal scrutiny by a sitting judge of the High Court to probe all government projects which have resulted in similar problems.

“The state government should constitute an independent inquiry. It will also be good if the Central agency carried out a probe so that anyone involved in this project or responsible for the incident is brought to book,” Syiem said.

State’s opposition All India Trinamool Congress (AITC) has castigated the National People’s Party (NPP)-led Meghalaya Democratic Alliance (MDA) government saying that the collapse of the under-construction assembly dome was a pointer to the “heights of corruption” in the state.

“It is an ominous sign for the people of the State. When the temple of democracy is being built, it is expected that there should not be any compromise,” AITC’s opposition Chief Whip, George B. Lyngdoh said.

“The State Assembly, especially the Floor and The Well of the House signifies hope, upholding of constitutional & democratic values, protection of the State’s and people’s interest. The crumbling of the dome is an ominous sign for the State and its governance,” Lyngdoh said.

Meanwhile, the Hynniewtrep Integrated Territorial Organisation (HITO) on Monday submitted a memorandum to Governor Satya Pal Malik appealing him to urge Assembly Speaker Metbah Lyngdoh to initiate an FIR and a CBI inquiry on the collapse of the dome which miraculous none of the labourers were injured and to enquire as to cost escalation or corruption if any in the allotment of work by the Meghalaya Assembly tender committee headed by the Speaker.

“We urge the Governor to kindly direct the Speaker to immediately issue a white paper, file FIR and invite CBI on this entire shocking incident of massive corruption in the Meghalaya Assembly leading to the collapse of the structure causing serious concerns as to the safety fitness of the new Meghalaya Assembly in the ongoing construction of the prestigious Meghalaya Assembly where Governor would have to attend frequently,” the HITO memorandum read.