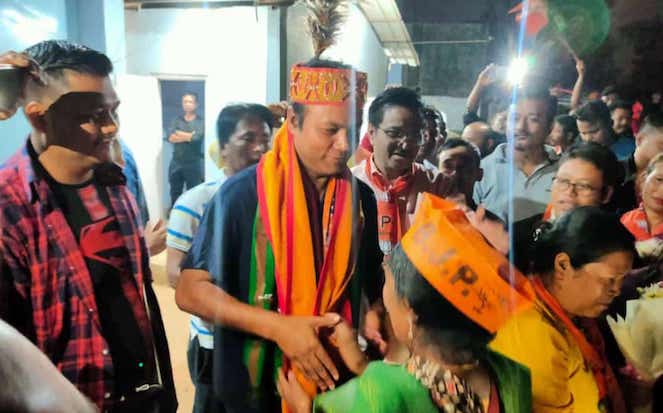 Shillong: Incarcerated Bharatiya Janata Party (BJP) leader and member of the Garo Hills Autonomous District Council, Bernard N. Marak, on Wednesday walked out of the Tura district jail after he was granted bail by a local court, three months after he was arrested.

“Today (Wednesday), the court granted conditional bail relating to the last case, which enabled him to walk out of prison, he told UNI over the phone.

The BJP leader was arrested from Uttar Pradesh in July following a raid by the West Garo Hills police at Rimpu Bagan located at Eden Bari. Since his arrest, bail was moved to the Meghalaya High Court in Shillong and the local court in Tura.

“This evening he (Bernard) was released from jail. There were six cases, which were slapped against him within the last three months. In all cases where he has been in custody, he has got bail,” Bora said.

Marak was initially arrested in a case under the Immoral Trafficking Act, and thereafter, a case was filed under the POCSO Act, which was a long-pending case where some other people were involved, and he was shown arrested in that case as well when he was in custody.

“Some new cases were created from the first case, which was not permissible as per law, but it was done, and he was arrested,” Bora added.

As on date, there are no more new cases.

On whether Bernard would be able to contest next year’s Assembly polls, Bora said, “Yes, he can contest. Only if a person has been convicted for more than two years, then he cannot contest.”

Emerging out of the Tura district jail, Marak said he had come out of the jail without any hatred but in peace.

He also announced that he would be contesting the upcoming assembly elections from South Tura against Chief Minister Conrad Sangma.

“Meghalaya needs change. A change for the better. Yes, I will contest from South Tura and may have to contest against the Chief Minister and it is the decision of my party leaders,” Marak said.

“The future will reveal the truth. Judicial system will do the right thing,” Marak said in response to a query asked by a reporter if his arrest was politically motivated.

Meanwhile, BJP state President Ernest Mawrie said, Marak was booked bereft of any proof due to “political vendetta” as Sangma is worried about Marak’s rising popularity in South Tura.

“ Marak was today released from police custody against all odds and despite the best efforts of the NPP government to keep him under lockup,” he said.

Challenging Chief Minister Sangma to fight only from the South Tura seat and not fight from two seats, Mawrie said only then he would be aware of the “might of Bernard in his own backyard.”

“Sangma is aware of the rising popularity of Bernard Marak and is scared of losing the peoples’ mandate in Tura. The people of Tura and the state have already made up their mind to oust the NPP government in the upcoming elections,” the BJP state President added.

Dubbing Marak a crusader, Mawrie urged him to continue his fight against the blatant corruption in the system.