Claiming that Meghalaya has embarked to become one of the best States in the country, the Chief Minister said that it was imperative that education is accorded the top priority. 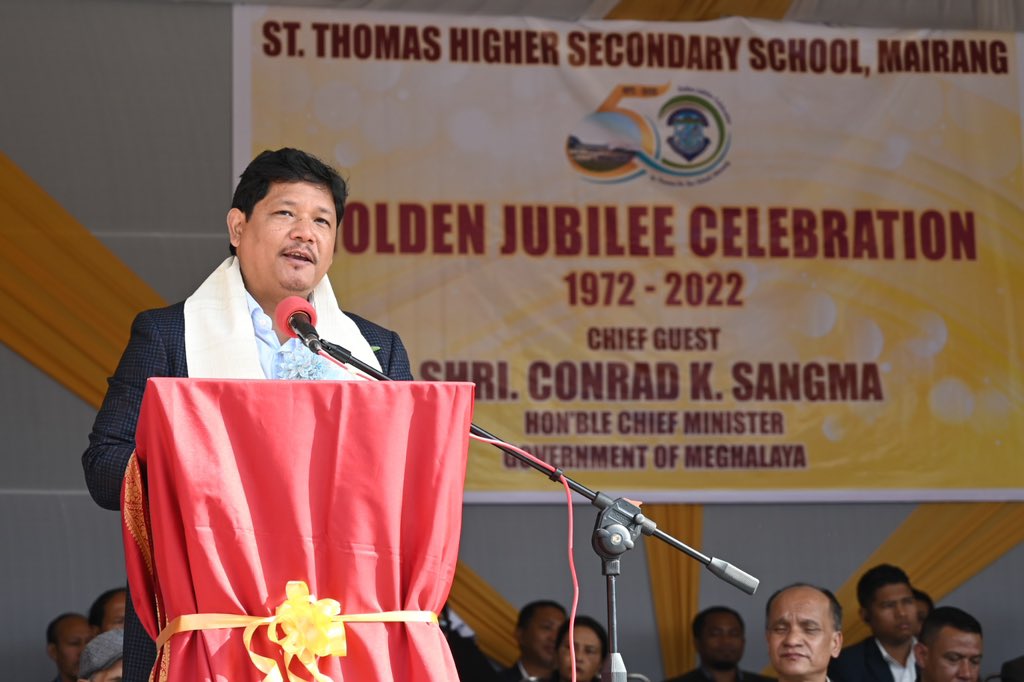 Mairang: Meghalaya Chief Minister Conrad K. Sangma on Monday said that the government despite the challenge in the education sector is working with commitment to ensure best education to the youngsters.

“If we are able to create right policies, and are able to work in a committed manner towards achieving our goals, it may take time but we will surely be able to demonstrate Meghalaya as shining example of how education should be imparted to the youngsters,” Sangma said addressing at the Golden Jubilee Celebration of St. Thomas Higher Secondary School at Mairang in Eastern West Khasi Hills.

Claiming that Meghalaya has embarked to become one of the best States in the country, the Chief Minister said that it was imperative that education is accorded the top priority.

He acknowledged that the education sector has multiple challenges but through the concerted effort it is being addressed to create a turnaround.

“Education is not an easy sector to work in. The challenges we face are numerous. It will take time for a turnaround but we will continue to focus on improving the sector in cities, urban towns and rural areas. It is a humongous task but we are prepared to move forward,” the Chief Minister explained.

Stating that in 2018 the State ranked at bottom position in different aspects of development, Sangma said that the indicators for development have increased and Meghalaya’s growth story is being acknowledged at national and international level.

“The state was at the bottom of the vaccination and immunization list in 2018 and in the matter of four years, the State from rank 27 now stands at rank 2. We are committed to bring change and it is being reflected in all sectors today. Be it tourism, health, entrepreneurship,” he added.

During his visit to Mairang, he also laid the foundation for the construction of gallery in the St. Thomas Football Ground and felicitated meritorious students of the school.

He also inaugurated the Computer Laboratory of Mairang Presbyterian Science College sanctioned under the Chief Minister’s Special Development Fund at a cost of Rs 6.77 lakh.

“The funds allotted to the college have been judiciously utilised through the provision of the computers which will add to the learning of the students”, the Chief Minister said, while lauding the institution.

He said that institutions like Mairang Presbyterian Science College are contributing to the State to ensure that the youth’s positive energy is being taped to its maximum.

The Chief Minister also attended the closing ceremony of the College Week of Khadsawphra College in Mairang.

“Khadsawphra College has the potential of being one of the best with its dedication for the future of the youth of the area. Encourage them to adopt a mission mode and vision oriented approach in their pursuit towards this end,” he said and urged the students to be punctual in every aspect of life.

The Chief Minister also announced that a sanction of Rs 20 lakh from CMSDF for the completion of the extension building will be allocated.