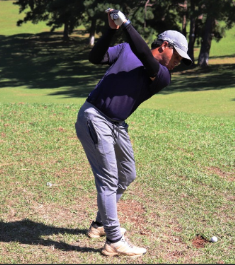 Shillong: With the glorious autumn sunshine on his back, Jason Passat, the youngest golfer in Meghalaya’s 14-member team will take part in the 2nd North East Olympic Games 2022 at the renowned Shillong Golf Course.

Passat takes a swing with his club and sends the ball a couple of hundred yards up the fairway. He has been doing this for hours every day in preparation for this month’s 2nd North East Olympic Games 2022.

There are 14 slots for each state and, so far, three have filled their quota – hosts Meghalaya, Assam, and Manipur – for a total of around 70 golfers across the eight states.

Assam is expected to mount a strong challenge, Passah said, but he sounded confident in Meghalaya’s strength.

Over the course of four days, consistency will be paramount and that requires long hours of practice.

The event coordinator is Rudi Warjri, who fell in love with the game during his career in the Indian Foreign Service.

Warjri is excited that golf is making its debut at the NEOG, which he feels is fitting given that it is now included in the National Games and Olympics.

“You have to remember that golf reached India before it even got to the United States. So, we have a rich golf legacy and heritage in India, including the North East, but we have not been able to take advantage of these assets as yet,” he said.

Shillong Golf Course was founded in the late 19th century and has largely been developed out of the natural surroundings, i.e. it was not artificially created, and has been dubbed the ‘Gleneagles of the East.

The 18-hole course is challenging for any golfer but the state’s players are hoping for a little home advantage.

The Meghalaya government has the vision to leverage this stunning course and has been ably supporting the various tournaments held there, which have included regional, Indian Golf Union, and Professional Golf Tour of India competitions over the years.

The tourism potential is a big one, as many countries in South East Asia, like Cambodia, Malaysia, and Indonesia are successfully promoting golf in this vein, Warjri said, and this would give the local community a real stake in the golf course.

The events already hosted in Shillong have given the Meghalaya Golf Promotion Society (MGPS) the necessary experience to be able to take on the North East Olympic Games, MGPS president Gaurav Bajaj, who will also be one of the competitors at the NEOG, said.

The MGPS has been trying to promote the sport at the grassroots over the years but is hoping that the NEOG will prove to be “a game changer for the growth of golf” in the state, Bajaj added.