The CEM is all set to award more than 100 land Pattas to tribal beneficiaries who are the rightful owners in recognition of their long-standing demand for rights over the land. 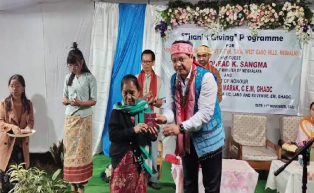 In a ‘Thanksgiving’ Ceremony organized by the villagers, the Chief Minister Conrad K Sangma, awarded ‘Land Patta’ to 100 tribal households in the presence of Swapnil Tembe, DC, West Garo Hills and Rikse R Marak, CEO, Tura Development Board and other dignitaries.

“Right over land is key to the tribal identity of our people. Hence the transfer of Land Rights to the rightful owners is one of our topmost agendas,” the Chief Minister said.

Sangma said told the villagers that in the past four and a half years of the ruling Meghalaya Democratic Alliance’s tenure, the government have done everything to help the people of Reserve Gittim.

“We have made legal provisions to award legal rights over land to the tribal people of Meghalaya. Going ahead we plan to help tribal people across the state who are facing similar challenges,” the Chief Minister said.

Unlike other parts of India, Meghalaya did not have clear land titles. This was due to unique agrarian systems (Shifting Jhum Agriculture) and distinctive social structure.

After the reorganization of States and award of Statehood to Meghalaya in 1972, tribals of various parts of Meghalaya have been requesting recognition of their rights over the land, an official statement said.

This was considering the rise of modern agriculture, which demanded clear demarcation of land and its ownership. The absence of Land Records and formal documentation further posed a challenge in identifying the rightful owners.

On August 19, 2018, the memorandum was presented to Chief Minister Conrad Sangma requesting him to resolve the challenge faced by people.

The task was immediately actioned and all legal hurdles despite the Covid 19 Pandemic were overcome, achieving the much-needed demarcation.

The CEM is all set to award more than 100 land Pattas to tribal beneficiaries who are the rightful owners in recognition of their long-standing demand for rights over the land.