During the enquiry, Rathore said the police learnt that the daily wagers, labourers, workers, sick persons, and other persons were facing immense hardship due to the price hike of fruits, vegetables, eggs, meat, sweets, and snacks. 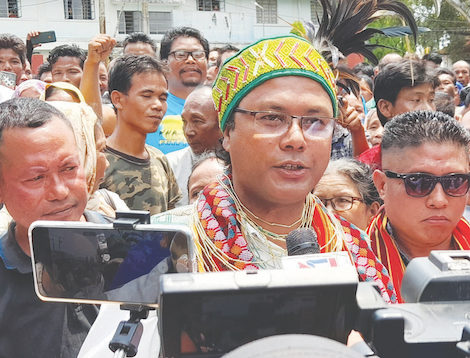 Shillong: Meghalaya BJP vice- president Bernard N. Marak, who is currently in police custody in connection with an explosive case and against whom there are allegations of running a prostitution racket from his farmhouse, has now been alleged of running an extortion racket in Tura, headquarters of the West Garo Hills district.

“Multiple feedbacks were received from the general public in the last few months and many reports were published by various newspapers in connection with the hiking of prices of snack, fruits, vegetables, eggs, meat in Tura town. These reports were taken up seriously and based on the directions from Police Headquarters, a confidential enquiry was conducted by this office,” Vivekanand S Rathore, the district police chief of West Garo Hills, said in a statement issued on Tuesday.

During the enquiry, Rathore said the police learnt that the daily wagers, labourers, workers, sick persons, and other persons were facing immense hardship due to the price hike of fruits, vegetables, eggs, meat, sweets, and snacks.

“It was also learnt that the prices were hiked few months back based on the instigation of office bearers of an organization which claims to be the ‘Meghalaya Chamber of Commerce’ being operated under the directions of one Bernard N. Marak @ Rimpu aided by other persons namely Wilver Dango M. Marak, Anish M. Sangma, Patcheng T. Sangma,” the police official revealed.

Rathore said this organisation has been found to be collecting huge amounts of money from shopkeepers in the name of membership fees and monthly renewal fees.

He alleged that the commission from the hiked prices was being channelled clandestinely to Bernard, Wilver, Anish Patcheng and their accomplices.

Apart from this, Rathore said the office bearers of the organisation have been threatening the non-tribal businessmen of the area to obtain a ‘No Objection Certificate’ from Bernard N. Marak @ Rimpu who is a member of the Garo Hills Autonomous District Council (GHADC) without which their ‘Trading by Non-Tribal (TNT) License’ cannot be renewed.

“Huge sum of money is extorted from these businessmen for issue of this certificate which was completely illegal. On receipt of the findings, the office called the shopkeepers for discussion over last few days for finding an amicable and sustainable solution,” the police official said.

Accordingly, the association named ‘Sweets and Confectionaries Association of Tura’ has unanimously decided to slash the prices of sweets and snacks in the interest of the general public. The discussion with other shopkeepers and associations is going on to reduce the prices,” he informed.

Rathore said an FIR has been registered and investigated into the illegal activities of the office bearers of the Meghalaya Chamber of Commerce.

“We will ensure the follow up action as per law in this matter. It has also been learnt that some persons have been indulging in monopolistic activities and extorting money from the suppliers in the name of protection money. They compel the shopkeepers to purchase the stuff from a particular supplier at the prices fixed as per their whims and fancies. After collecting more facts, action shall be taken in due course,” the police official asserted.