Drawing a parallel with the Congress government of 2014, State BJP president Ernest Mawrie said that the National People’s Party (NPP) is aware of its “declining popularity and rising anger” among the people against them. 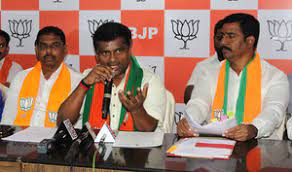 Shillong: The Bharatiya Janata Party (BJP), which is a constituent of the NPP-led Meghalaya Democratic Alliance (MDA) government, on Tuesday took pot shot at the Conrad Sangma-led party for its “sudden urge” to work for the people of the state in the background of the chief minister being on an inauguration spree of administrative units in the state.

Drawing a parallel with the Congress government of 2014, State BJP president Ernest Mawrie said that the National People’s Party (NPP) is aware of its “declining popularity and rising anger” among the people against them.

“The NPP is well aware of the fact that they have done nothing in the last 4.5 years for the people. They know that the people are ready to vote them out. And just like the drowning Congress in 2014 (before Lok Sabha elections), the drowning NPP is now on an inauguration and foundation stone laying spree,” Mawrie said.

“Most of the projects are being inaugurated in an incomplete state, and foundation stones are being laid with no proper planning or resource mobilization,” he alleged, adding that this was “too little, too late”.

Alleging that all this was being done to “fool the voters into trusting the NPP once again”, the BJP leader claimed that most of the developmental works which have been done in the state in the last 4.5 years have been under the BJP-led Central Government schemes.

On the FOCUS scheme too, Mawrie wondered as to where the money “really comes from”.