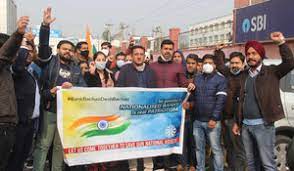 Shillong: Employees of public sector banks, including those of the State Bank of India (SBI) launched a two-day strike which began on Thursday in Meghalaya, in protest against the Central Government’s move to bring in the Banking Laws Amendments Bill, 2021 in order to privatize two public sector banks.

The strike affected normal banking functions in the state and elsewhere in the country. The private sector banks, like HDFC Bank, ICICI Bank and Meghalaya Rural Bank, functioned as usual.

Joint Convener of UFBU, Manoj Chakraborty told reporters pointed out that public sector banks act as catalysts in the economic development of the nation in general and particularly for the underprivileged sections of the society and backward regions of the country.

“Nationalized banks have played a major role in the development of agriculture, small trade, small business, SSI, transport and in uplift of weaker sections of the society, he added.