Meghalaya, Assam to “go beyond status quo” & adopt a “give and take policy” to resolve the boundary dispute

Sarma, however, said that the status quo in regard to developmental activities that were arrived upon by the past governments would be maintained 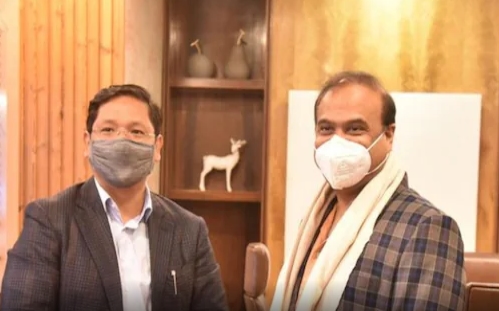 Shillong: Meghalaya and Assam Chief Ministers, who met here on Friday resolved to move “beyond status quo to solution” in regard to the long-pending boundary dispute between the two neighbouring states.
Briefing the media after holding the first official level talks with his Meghalaya counterpart Conrad K Sangma on the inter-state boundary issue at the State Secretariat here, Assam chief minister Himanta Biswa Sarma said, “We have decided to move beyond status quo to solution”, referring to the earlier such meetings between past Chief Ministers which had always ended on the announcements of maintaining status quo.
He, however, said that the status quo in regard to developmental activities that were arrived upon by the past governments would be maintained.
“We want to work for a solution while maintaining status quo,” he clarified, adding that out of the 12 areas of dispute, all cannot be resolved at the same time, he said, adding that at some point in time the presence of the Union Government would be necessary as state boundaries can only be changed by the Parliament as per the Constitution.
He said there was “maybe give and take” or “redraw” of the inter-state boundary.
“We all know that Meghalaya has identified twelve places as disputed areas and claims have been made and historical facts and other
relevant data have been placed on table to justify the claim that these were part of State of Meghalaya and Assam should give it back to Meghalaya. Assam has also justified or we have placed our documents to prove that these places belong to Assam and the claims made by the State of Meghalaya may not be justified,” Sarma said.
“In view of the contradictory stand, it is important to resolve this dispute in a spirit of give and take and considering the long-standing friendship between the people of Assam and Meghalaya and also in order to keep the spirit of northeast alive…we have decided that all these twelve sites will be discussed one by one and relevant merits and demerits of claims and counter-claims will be discussed,” the Assam Chief Minister said.
“What we are going to say to the people of Meghalaya and Assam is that we are firm and committed to resolve this dispute,” Sarma said
and informed that he has invited Sangma to visit Guwahati on August 6 to continue with the “second round of discussions”.
“If necessary we will go to all the twelve sites together to appreciate each other’s position…by the blessings of the people of Assam and Meghalaya, I am convinced that we will be able to resolve this dispute,” Sarma voiced optimism.
Terming Friday’s meeting with his Assam counterpart a “historic one”, Meghalaya CM Conrad K Sangma observed that the visit of his Assam counterpart to the State secretariat would send a signal to the people that Assam was “very keen” to see a solution to this “very long pending” issue.
“The boundary issue had been pending for too long and the people had been suffering a lot and it had always led to lot of differences and violence also and people have not been able to stay in peace and not received the development that they deserve. Therefore, somewhere we need to find a solution and finalize this long pending issue,” Sangma said.
“We have decided that no longer will we look at status quo as the outcome of the meeting but we will try to change and find a solution…
It is not very simple, so one should not expect or think that we will be able to resolve issues that have been pending for so long in a matter of days. It will require a lot of homework and meet people at the grassroots level,” he said.
“Depending totally on history and documents of the past, may not be the best approach altogether. So we are going to look at the factual data. But we also need to look at what other ways we could move forward to find a practical solution to the entire problem, which is going to be amicable and acceptable to both sides,” the Meghalaya Chief Minister underscored.
Sangma said that the officials of both the states would meet ahead of the second Chief Ministerial level meeting in this regard, and expressed hope of a positive outcome to the boundary dispute.
The Meghalaya Chief Minister also mentioned that the Union home minister Amit Shah, who is going to visit Shillong tomorrow, has also expressed desire to resolve the boundary dispute between the two neighbouring states.