Meghalaya: Another wooden statue of Donald Trump pops up in India

On January 20, 2017 Trump was sworn-in as the 45th President of the United States of America. 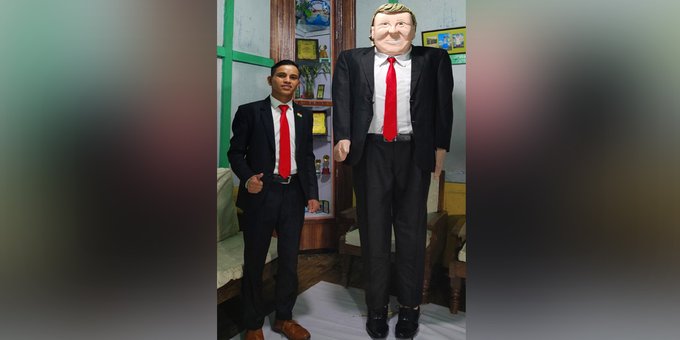 A law student from India’s northeastern state of Meghalaya has sculpted a six-foot and three inches wooden statue of Donald Trump in a remote Moolamylliang village in East Jaintia Hills district after Bussa Krishna, a 33-year-old from Telangana.

Krishna, who died of heart attack in October 2020, is reported to be the first man who made a statue of Trump and turned his puja room into a temple for the American president in 2018.

“I am a big fan of him (Donald Trump) and I support him. I have started sculpting the statue of Trump from January 3, 2022 and completed the statue on June 2, last,” 23-year-old Paiasesful Pachiang, told UNI.

“I started to make this statue because I have been a big fan of him (Donald Trump) since the 2016 US Presidential election. He (Trump) is a “wiseman” and “God-fearing” president of the United States,” he said.

On January 20, 2017 Trump was sworn-in as the 45th President of the United States of America.

Pachiang felt that his journey taught him many things, including patience and courage.

“I wish to meet him (Donald Trump) someday. In future I want to become like him and serve India,” Pachiang said.

Pachiang, whose dream of becoming the Prime Minister of India in the future, said, “India has produced many world leaders who come from poor families and Prime Minister Narendra Modi is a perfect example. I also come from a financially-backward family and I hope one fine day I will also be elected as Prime Minister,” he said.