Mayawati did not forge alliance with Cong due to fear of Central probe agencies: Rahul

He also accused the former UP Chief Minister of not raising the issues concerning the Dalits due to pressure from Central agencies. 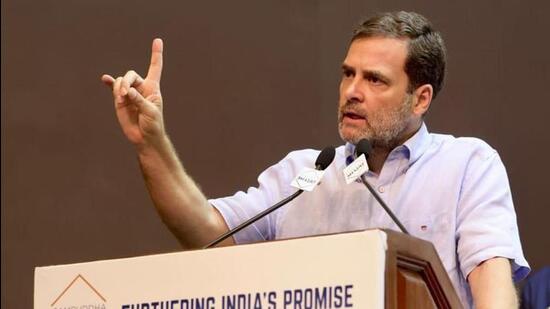 New Delhi: Congress MP Rahul Gandhi on Saturday claimed that due to pressure from Central agencies Bahajun Samaj Party (BSP) supremo Mayawati did not forge a pre-poll alliance with Congress in the recently concluded Assembly polls in UP.

”I gave a message to Mayawati ji to cobble an alliance with our party. We offered her the CM post. Despite our several attempts, she did not respond. Why? Because of CBI, ED and Pegasus she gave an open way (to BJP in UP). These agencies control ‘political system” the former Congress president said after releasing a book titled “The Dalit Truth” (The battle for realizing) Ambedkar’s vision at Jawahar Bhawan here.

He also accused the former UP Chief Minister of not raising the issues concerning the Dalits due to pressure from Central agencies. The Congress and the BSP fought the UP Assembly polls solo. Both the parties were decimated to a single digit.

Congress won two seats while BSP won one seat. Attacking the ruling BJP and its affiliated Rashtriya Swayamsevak Sangh (RSS), the Congress MP said the ‘Constitution’ is in danger as all the institutions (Government) are in the hands of RSS.

He further said, “Attack on the institution is not a new thing. It had started when the bullets were showered at Mahatma Gandhi.” “See the condition of the economy of the country and unemployment. This is the time to fight following the principles of Mahatma Gandhi,” the Congress MP said.

In an apparent attack on Modi, he said “majority of politicians are only interested in grabbing power and they are thinking day and night about it. I was born in a family that wielded power but it may be curious, I am not interested in power.”

“I have a debt to the country, I think that my country has given me this love, respect; how do I do this?” Rahul said.

He said, “As I sleep in the night, I try to understand the nation. It’s like a lover’s quest. When you love something you try to understand it. Concerning untouchability, he stated that it was a major problem in the country and that “I am inclined to believe that there is only one country in the world where people refuse to touch another person.”