Manipur’s Senapati district is all set for poll 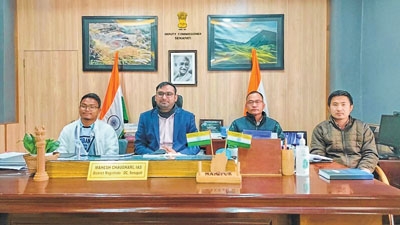 He further said the Senapati Mini Stadium has been chosen for dispersal ground of polling personnel. He highlighted that the Single Window Clearance cell and SUVIDHA app have been activated for obtaining various permissions.

He maintained that as per ECI guidelines issued by the Election Commission, till February 11, general public meeting will be allowed with 50% of the capacity in its designated place. He also mentioned that a prototype polling station will be made available for the public at Mini Secretariat after February 15. Poll preparedness has been reviewed every day, he added.

H. L. Jain, R. O. of 48 Mao & 49 Tadubi AC’s said that the notification for nomination has been issued but no candidate has filed the nomination paper in the district till date.

Thangkhochon Hoakip, ADSP, Senapati said that CRPF, BSF and CISF are deployed along with the police personnel at certain location in the district. He also said that there has been interaction with the village authority and their co- operation for free and fair election was sought.

L. Derrick Khobung, Nodal Officer for Material Management said that all documents relating to nomination are in place. He also said that 341 EVM Control units, 351 ballot units and 379 VVPAT are available for use in 228 polling stations in the district in this election.

T. Shyamkumar, Nodal Officer for MCC said that MCC came into reinforcement soon after the notification on 8th of January, 2022. He also said that briefing of MCC to the political parties and intending candidates has been held twice in the district. He mentioned that the total defacement removal in the district has carried out 240 in public properties and 71 in private properties. There has been not FIR on misuse of vehicles, violation of loudspeaker, and other, he added.

S. Lunguiba Thangal, Nodal Officer for Postal Ballot said that Postal Ballot/ Form 12 will be made available in Senapati NIC websites or can be obtained from the RO of the district where the employees are posted. It is mandatory to enclose with appointment order of post from the DEO, he added.  He also said that  Election Duty Certificate/ Form 12A  can be obtained from the RO if polling personnel on duty is assigned at one own constituency.