Awangbow said the revival of the State’s major water irrigation project is one way of pushing the agricultural lands for self-sufficiency in food grain production. 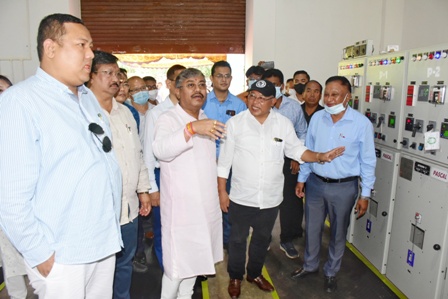 Speaking on the occasion, Minister Awangbow said that under the initiative of Chief Minister,  N.Biren Singh and Minister Letpao Haokip, the installation of machines was made. He stated that the revival of the State’s major water irrigation project is one way of pushing the agricultural lands for self-sufficiency in food grain production.

The Minister also assured that the Phase II of LLIP for giving irrigation water to the Imphal High-Level Canal (IHLC) and Moirang High-Level Canal (MHLC) is under process and is expected to be completed very soon. He also said that the Department is trying its best level to supply Irrigation water through High Canals in the next season. wangbow further said that the problems faced by the farmers regarding water shortage have been solved now.

Works Minister Govindas Konthoujam said that the problems of water faced by the people of Bishnupur AC, Part of Moirang AC and Part of Oinam AC will now be solved with the installation of Pump House 1. He also said that if the irrigation system is good, the economy of the state will improve.

P.H.E.D. Minister, L.Sushindro said that Loktak Lift Irrigation Project is the most important and valuable project. He also said that under the initiative of CM Shri N.Biren Singh, the remaining work of the Loktak Lift Irrigation Project will be taken up at the earliest. The Minister further said that the water shortage faced by the farmer has been solved and believed that food production will now be increased in the state.

MLA Thongam Shanti Singh believed that under the initiative of CM N.Biren Singh there will be mass production of food grain in the state with the installation of the pumps.