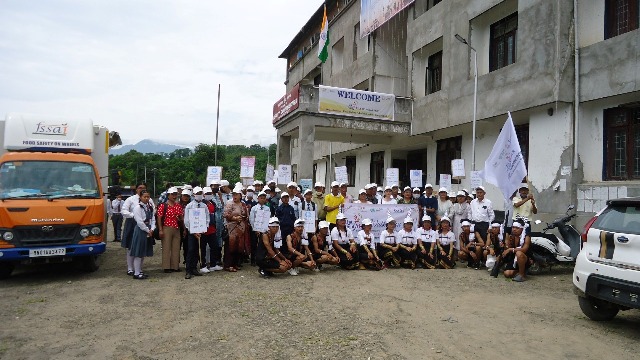 Kangpokpi/Kamjong: As a part of the ‘Azadi ka Amrit Mahotsav’ to commemorate the 75 years of India’s Independence, Walkathon and Eat Right Mela on the theme ‘Eat Right, Eat Healthy and Eat Sustainable’ was held Friday in Kangpokpi and Kamjong districts.

In Kangpokpi, Food Safety Administration, Kangpokpi organised the function at the Multipurpose Hall of DC Office Complex, Kangpokpi HQ with an objective where people from all walks of life joined to celebrate Freedom of Choice of foods to enable all citizens to eat right.

Cultural dance was performed by the ECA Church, also painting and written quiz competition was also held which was participated by the students of JNV, JN Public School, Elite Higher Secondary School, Lighthouse School among others. As part of the function prizes were also distributed to the position holders.

The function was also attended by Chief Medical Officer Dr. Lamkhoneng Haokip, as president of the function; Chairperson of Town Committee, Adam Leivon, as guest of honour of the function,

Kamjong district observed the Eat Right Meal and Walkathon 2022 as a part of celebrating Azadi ka Amrit Mahotsav and the 75 years of India’s Independence. Organised by the Food Safety Administration, Kamjong district under the guidance of Food Safety & Standards Authority of India (FSSAI), hundreds of public especially the school-going students participated in the event that was held at the Town Hall, Kamjong HQ.

The formal function of the observation was graced by SDO Kamjong, Samuel, CMO Kamjong district, Dr Lucy Duidang and SP, P Manjit Singh as the chief guest, president and guest of honour respectively.

The observation was kicked off with the walkathon which started from Town Hall, and after reaching upto the Kamjong Gate ended at the Town hall.

As a part of the function, painting and quiz competitions were held for school students in different categories. Also, best food stall was selected and rewarded accordingly.

As a special part of the function, renowned bodybuilders Solimla Jajo and Solan Jajo with their team performed a demonstration show.