MSFDS secretary also said the state is coming out with a comprehensive film location compendium to assist producers in deciding their locations in the State. 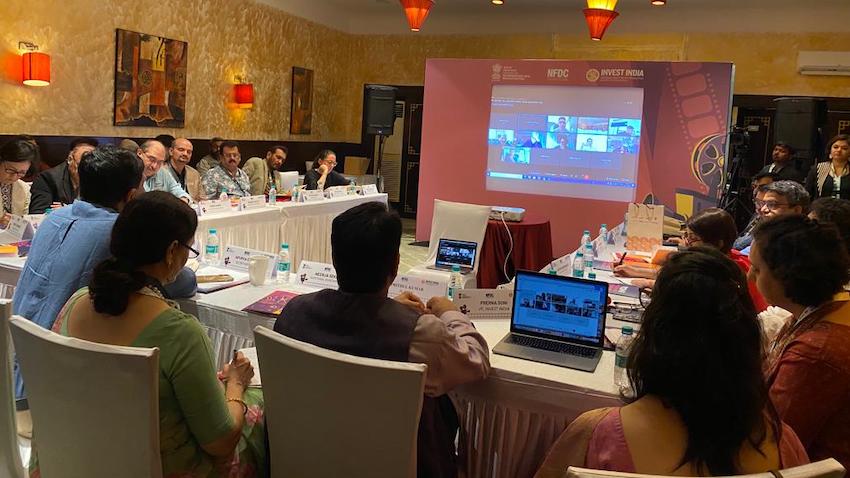 State representatives of Bihar, Pondicherry and Manipur were given a platform to interact with 26 film producers of India and Bangladesh and convince them to come to their respective states to shoot their films and avail attractive incentives.

While the representative of Bihar informed the producers that Bihar is rolling out the country’s most comprehensive film policy along with attractive incentives to the tune of Rs. 3.5 crores if they choose to shoot their films in Bihar,  the representative of Tourism Board of Pondicherry said the union territory that has white sandy beaches and French architecture is yet to formulate a film policy of its own, it nevertheless offers sponsorship to filmmakers shooting their films in the union territory.

Luring producers to make Manipur their film destination, MSFDS Secretary told producers that the state has a film policy which mentions offering incentives to producers who shoot their film in the State of Manipur, the exact amount and conditions of the incentives are in the process of formulation.

Sunzu Bachaspatimayum further informed that the State, as of now, does not charge any location fees to shoot a film and MSFDS is the single window for processing all film related permissions for the state of Manipur, to be cleared in 10 days.

He also assured the producers to help them in availing good discounts on their hotel bills depending on the number of  crew and days of stay.

MSFDS secretary also said the state is coming out with a comprehensive film location compendium to assist producers in deciding their locations in the State.

Notably, MSFDS Secretary earlier pitched for infrastructural investment such as in high-end equipment like cameras, post production facilities and indoor shooting studios  at the Invest India round table conference in the Film Bazar.

Significantly, this is the first time the state is participating in the forward looking Film Bazar and even has a Manipur pavilion to attract film crews from around the globe to shoot in Manipur which is yet to be explored on films.

The most exhausting Film Bazar, organized by National Film Development Corporation, NFDC, under the ministry of Information and Broadcasting, that began on 21 Nov concludes Thursday , completing its 4 days of  networking, film financing and film marketing platform.

In the special Golden Jubilee of Manipuri Cinema package at IFFI, Manipuri film ‘Look at the Sky’ by the young SRFTII graduate, Ashok Veilou from Purul, Senapati district  and the first Manipuri feature film ‘Matamgee Manipur’, directed by Deb Kumar Bose was screened at the Maquinez Palace, Panaji as its second day schedule. Director, Ashok Veilou and veteran actor K. Tomba Singh were felicitated before the screening.