Manipur governor made his maiden visit to Chandel district 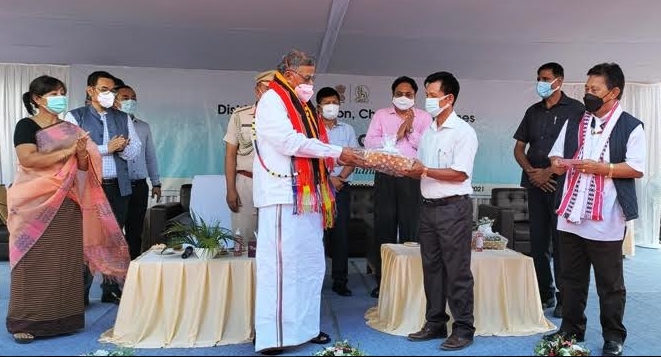 Chandel: La Ganesan in one of his first major public appearances after taking charge as the governor of Manipur made his maiden visit to Chandel district Monday.

During his visit the district administration Chandel hosted an interaction program with the district level officers and members of civil society organisations. Monday’s program was also attended by Caretaker- Chairman ADC Chandel, D RingoLamkang; Secretary to the Governor, Manipur, Bobby Waikhom, OSD to Governor and ADC to Governor, Deputy commissioner Chandel, village chiefs, members of the civil society organisations, DLOs and other public and officials of the district.

Speaking on the occasion Governor La Ganeshan said that in his visit he wants to give more emphasis on “Arogaya”, the overall well-being, health of mind, body and spirit. He said, “wealth is lost nothing is lost but health is lost something is lost”. Speaking about the significance of Navratri and Durga puja he said that those who have strength are respected even by God and Goddess. He then said that Manipur is famous for its sports and cultural activities which are very much related to health and mental well-being. He further said cleanliness is the most important thing. He used an anecdote from the Hindu mythology about building a temple to drive home his point. He also congratulated the district administration and the Deputy Commissioner, Chandel for providing clean toilets to all the girls’ schools throughout the district and also for achieving hundred percent open defecation free in the district.

He further said that his main concern is the rate of vaccination in the district which is only 50%, and advised that the administration should try to achieve 100% or at least 90% vaccination of both doses in the district. He said that the government cannot stop the pandemic but it can give vaccines to protect from it, he added that the government is even using drones to deliver vaccines and is ready to provide everything and urges the public to support the district administration and help in becoming the first 100% vaccinated district of the state.

Following his welcome speech the Deputy Commissioner, Chandel, Mayanglambam Rajkumar presented a detailed ppt report about the district and the developmental works being taken up in the district. In his report he said that according to 2011 census the district has a total population of 85 thousand and it has 224 census villages and is divided into 3 sub-divisions. He further said that it is the only aspirational district in the state. During his presentation, he highlighted the challenges being faced by the district administration like the bad connectivity due to nonexistence and bad road,s communication problems like, ‘shadow areas’, lack of district officials and manpower, lack of medical staff and health facilities etc. He also speaks on the steps being taken up for the improvement of these problems.

As part of today’s program, the Governor also honoured the families of the two Kargil war Martyrs, Chara Nicholas Moyon of Hegrutampak village and Ng.Beningvir Moyon of Kupthar both from Naga Regiment.