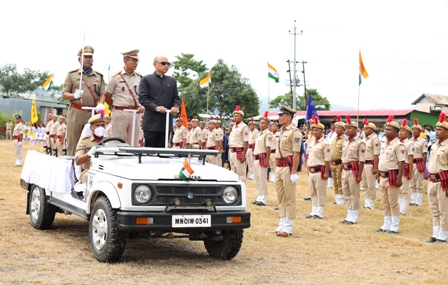 Imphal: District Administrations in all the district headquarters of Manipur also celebrated the 76th Independence Day Monday with Deputy Commissioners of the respective districts hoisting the National Flag and taking salute of the marching contingents.

In Kaching the celebration was held at Sumak Leikai Ground (opp. to JnNRUM Hall), Kakching with DC, Kakching, Somorjit Salam, hoisting the National Flag. He also reviewed the parade and took salutes of the marching contingents.

Addressing the gatherings, Somorjit Salam, said that “we are gathered to witness a very historic event of completing the 75 years of being an Independent nation. This Independence day is very special and as such we are celebrating the Azaadi ka Amrit Mahotsav.

In Noney district, the 76th Independence Day of India was celebrated with much pomp and grandeur at Longmai common ground, Noney.

Speaking at the occasion as chief guest, DC Noney, Haulianlal Guite highlighted the significance of celebrating the independence day every year. We are proud and fortunate that this beautiful state under the leadership of Chief Minister N. Biren Singh, law and order has improved drastically, infrastructure development has jumped exponentially and progress and prosperity can be seen in the lives of our citizens, he said.

He also stated that the Har Ghar Tiranga movement has been extremely successful in the Noney district during the last few days with great participation from the schools, and public and uniform services with proper coordination. It is because of the freedom that we now enjoy the rights and shrines of the constitution today, he also added.

Additional SP Law and Order Namsadai Peter was the parade commander of the function.

Churachandpur also joined the rest of the country in celebrating 75 years of India’s Independence. A district-level program is held at Public Ground, Hiangtam Lamka.  DC Churachandpur, Dr. Sharath Chandra Arroju, hoisted the National Flag and took the Rashtriya Salute as the chief guest from the Parade Contingents. SDPO Churachandpur Priscilla Tuboi, commanded the 17 march past contingents.

Speaking on the occasion, Dr. Sharath Chandra Arroju pays tribute to the many great freedom fighters who took part in shaping the glorious history of the people, culture, and achievements. “In terms of indices like GDP we are on our path to becoming a $5 trillion economy” he stated. Churachandpur Medical College is being inaugurated and the academic session is expected to commence in Sept. 2022, he added.

The celebration included cultural items from different communities and bamboo dance from the Young Mizo Association. The chief guest also gives away appreciation certificates to 116 persons including journalists and community groups in recognition of their commendable services.

Addressing the gathering, Deputy Commissioner, W. Malemnganba Chenglei remarked that the year 2022 is the 75th year after Independence, the country is celebrating and commemorating 75 years of independence and the glorious history of its people, culture and achievements with great excitement and tribute to the freedom fighters. He recalled that the celebration is named ‘Azadi Ka Amrit Mahotsav’ the overall celebrations began on 12 March 2021 and will continue till 15 August 2023.

Speaking on the occasion, DC Lourembam Bikram said that the district has been conferred the prestigious ‘PM Award for Excellence in Public Administration 2021’ for best performance in the implementation of ‘Promoting Excellence in Sports and Wellness through Khelo India Scheme.