K Meghachandra said that the incident has again highlighted the complete collapse of law and order in the state. He said that assassination of Abonmei, the voice of the unity and integrity of Manipur, must be taken with utmost seriousness. 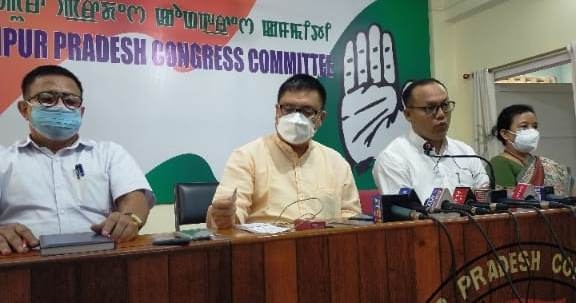 Imphal: Alleging that law and order have totally collapsed in the state, the Manipur Pradesh Congress Committee on Thursday demanded the immediate sacking of Deputy Commissioner and Superintendent of Police, Tamenglong district and sought an independent judicial inquiry by a retired high court judge into the killing of social worker, Athuan Abonmai by armed terrorists on Wednesday.

A former president of Zeliangrong Baudi, Abonmai, who came to Tamenglong from his home at Langol Tarung, Garce Colony, to attend a community outreach programme of the State government, was allegedly abducted in a full public view from the programme centre by the suspected armed militant group – NSCN-IM at around 11.30 am.  Later, his lifeless body was found shot dead near a stone crushing unit at Pallong village between Tamei and Tamenglong in the evening.

Strongly condemning the inhuman and brutal killing of the social worker who always stood for the integrity of the state by the militant group, the Congress Working President, K Meghachandra said that the incident has again highlighted the complete collapse of law and order in the state. He said that assassination of Abonmei, the voice of the unity and integrity of Manipur, must be taken with utmost seriousness. His loss is a loss of Manipur, he added.

The Congress also demanded that the DM and SP of the district concerned must be sacked within 24 hours, and both should be held responsible for the loss of Abonmai’s life.

Speaking to reporters at Congress Bhavan here, the lawmaker said the Director General of Police of Manipur must explain as to what had led to the failure of non-responsiveness to the FIR lodged by Abonmai’s son at Lamphel police station and why and how the police and district administration could not prevent the abduction of Abonmai in a broad-day light from a government event in full public glare.

The party considered that the broad day light assassination of Abonmai is a ground reflection of the total failure of State Home Department, CID, Crime Branch and State Intelligence Bureau in the State, Meghachandra added.

Stating that incident of such brutality and inhumanity has never ever taken place in the history, the Congress said that bullets can’t silence the true sons and daughters of Manipur. Many Abonmais will be born to follow the philosophy and ideology of him, he added.

I Hemochandra, Working President of MPCC, said the Athuan Abonmai was one of the most popular and respected figures in the state and added despite being born in Tamenglong and belonging to Zeliangrong Community, he always stood for the integrity of the state. The incident which took place in a programme where Manipur CM participated underscored the personal security of the Chief Minister himself, the ex-MLA said.