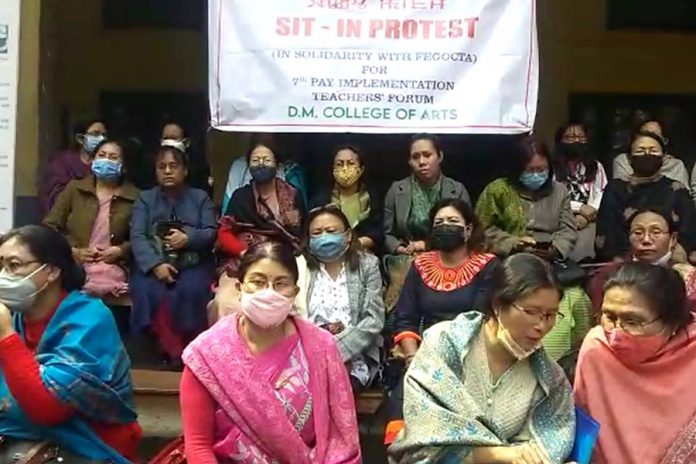 The teaching community is aggrieved that a long-standing demand already fulfilled in 2018 in other states and other employees of the state have not yet been translated into action. The stir began with token protests but later blossomed into full-blown agitation of a complete cease work strike on February 17 last. Rallies were also organised to highlight their grievances.

The FEGOCTA wants immediate Orders of 7th UGC Pay and Regulations, 2018 as per Cabinet Approval of August 6, 2020. This was the fifth time the teachers have launched a stir and all the previous stirs were called off after assurances were given to fulfill the demands.

The teachers felt the government however issued contradictory, ambiguous and incomplete orders without reflecting the mandate of the UGC Regulations, 2018. It should be implemented in full without modification or relaxation as per UGC Notification dated 18th July, 2018 and adopted by the State Cabinet on 6th August 2020, the teachers said.

There is no question of stopping the stir now and the normal classes will be taken only after the government issues the relevant orders it was added. Teachers have been sidelined and ignored as other employees were already enjoying the benefits. Considering the mammoth task of looking after the students the teachers had repeatedly called off all stir only on assurances and even after six months of a Cabinet decision no order has been issued a teacher said.

The teachers pointed out that they started the stir after giving considerable time to the government. The FEGOCTA office-bearers said they don’t want to launch another stir but want equal treatment of all employees. The teachers can’t be blamed for the stir as the government has repeatedly failed to act on its own decisions and assurances it was stated. This time they will call off the stir after getting the Order not assurance unlike the previous time it was further stated. Other college associations have also extended support to the body and teachers continue to stage sit-in protest in front of their colleges.

The UGC Pay and Regulations, 2018 is a National Policy for college and university teachers. The stir has also resulted in a stir by students demanding early resolution of the crisis. They have appealed to the government to bring an amicable solution to the crisis.

Chief Minister N Biren appealed to the teachers to withdraw their stir in the State Assembly and Education Minister S Rajen also appealed to end the stir. The teachers were not satisfied with the

appeals and assurances but questioned the rationale of leaving out teachers from the new pay structure.

Students’ bodies have demanded immediate resolution of the matter as they have already lost precious time due to the pandemic. A financially tight government, teachers unprepared to be treated unequally and students shouting for classes make it imperative for the government to immediately start holding talks with the teachers and resolve the crisis once and for all. UNI