The Centre is equipped with oxygen concentrators for treatment of COVID-19 positive patients who need oxygen supply and will be manned by 15 doctors, 21 nurses and other staff. 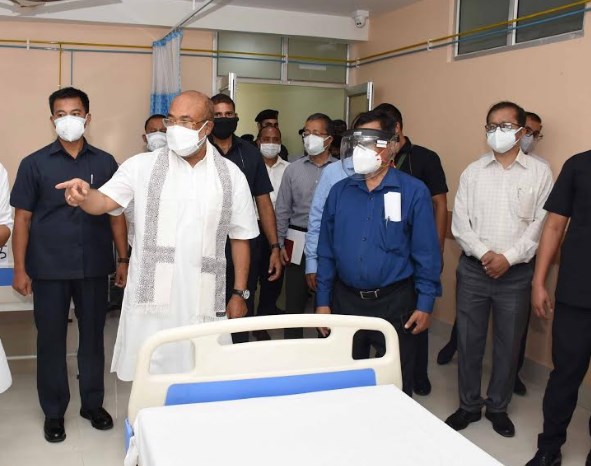 Imphal: Chief Minister N. Biren Singh Saturday inaugurated Iland COVID Care Centre at Canchipur, Langthabal Kunja, Imphal West District. The Centre which has a capacity of around 60 beds is the first in Manipur to have earmarked half of its capacity for Children below 15 years of age.

The Centre is equipped with oxygen concentrators for treatment of COVID-19 positive patients who need oxygen supply and will be manned by 15 doctors, 21 nurses and other staff.

While addressing the gathering, the Chief Minister expressed his thankfulness to the owner of the Iland Hospital for letting the Government use the hospital premise as COVID Care Centre without taking any consideration in return.

He stated that at the beginning of the second wave of the pandemic, the State had faced shortages of certain facilities like oxygen supply, ventilators and ICU beds among others. However, with the prompt action taken up by all concerned officials round the clock, the State now had adequate facilities for treatment of COVID-19 positive patients and to curb its spread.

N. Biren further informed that the State had now acquired adequate stocks of oxygen cylinders and oxygen concentrators and added that the number of ICU beds had also been considerably increased from merely around 40 earlier to 200 now. He further stated that 70 new ICU beds with ventilators had been set up in JNIMS and would be ready to use in a couple of days. Another 30 ICU beds would be added soon to make it 100, he added. He also assured that the Government is in process to increase the number of ICU beds to 10 in every district.

He stated that a Liquid Medical Oxygen Cryogenic Storage Tank of 20 KL would also be installed at Porompat within this month and with this, the State will not have any dearth in oxygen supply. He advised the people of the State not to panic with the pandemic as it can be cured within 14 days by medication if detected early and appealed to be careful and disciplined by adhering to the Standard Operating Procedures issued by the Government.

He also urged the public not to circulate any misleading information in social media regarding matters related to the pandemic and added that the Government would take stringent action for playing with human life in this crucial time.

The Chief Minister also planted a tree sapling at the Iland hospital campus in connection with World Environment Day 2021. He appealed to everyone in the State to plant at least one tree on this day and to stand against large scale deforestation.

Deputy Chairman, State Planning Board L. Rameshwor and other Government officials attended the programme among others.

Later, from the Iland Hospital, the Chief Ministerial team headed to Manipur University and took stock of the arrangement being made for setting up COVID Care Centre at the newly constructed Men’s Hostel of the University. It is reported that the Centre will have a capacity of 150 beds each in two hostel blocks.

N. Biren also planted a tree sapling at the campus of the University after the inspection of the Centre.