Chief Minister Biren observed that there are not many good published works of our history, on our forefathers’ struggle, and appealed to intellectuals, scholars, historians, etc of the land to do the needed research 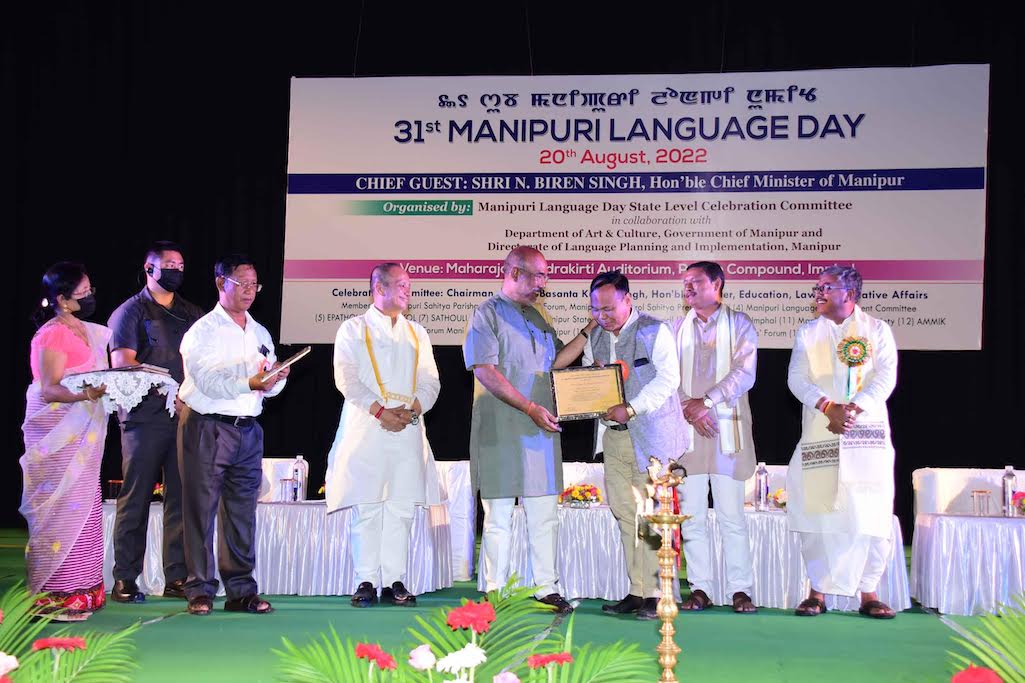 Imphal: Chief Minister of Manipur, N. Biren Singh Saturday paid his respect to those who participated in the movement for the inclusion of the Manipuri Language in the 8th Schedule of the Constitution of India.

N. Biren Singh was attending the 31st Manipuri Language Day observation, Saturday as the chief guest at the Maharaja Chandrakirti Auditorium, Palace Compound. The observation was organized by the Manipuri Language Day State Level Celebration Committee in collaboration with the Department of Art & Culture, Government of Manipur and the Directorate of Language Planning and Implementation, Manipur.

Chief Minister Biren observed that there are not many good published works of our history, on our forefathers’ struggle, and appealed to intellectuals, scholars, historians, etc of the land to do the needed research and publish their work based on truth and facts.

Stressing the need to protect what has been left by our ancestors, he said we have to safeguard, and protect the indigenous land, identity and language.

N. Biren Singh further explained that we need to educate the younger and future generations of our history, nationalism, nation-building concept, the obstacles faced by the forefathers, etc.

The Chief Minister proposed a three-month course for those willing to study the dialects and languages of the different communities of the State. This will encourage interaction amongst the people and help in building unity and nationalism, he observed.

Lamenting that, many books have been published distorting the history of the land, the Chief Minister said that a State level committee will be set up under the Education Department to check and regulate books published in the State especially related to history.

The Chief Minister also proposed schemes to develop local language dictionaries and help in developing and protecting the languages and dialects.

Hon’ble Education, Law & Legislative Affairs Minister and Manipuri Language Day State Level Celebration Committee Chairman, Th. Basanta Kumar Singh said that today is a significant day for the State as the Manipuri language was included in the 8th Schedule on this day in 1992.

The United Nations Educational, Scientific and Cultural Organisation (UNESCO) has classified all languages of the world and categorized the Manipuri language under vulnerable classification, he said, expressing the importance of promoting and preserving the language.

The Minister further stated that under the leadership and advice of Chief Minister N. Biren Singh, efforts are on seeking recognition of the Manipuri language as the 7th Classical Language of India.

PWD Minister, Govidas Konthoujam, and Rajya Sabha MP, Leishamba Sanajaoba also attended the observation. Altogether 17 organisations, which are part of the Manipuri Language Day State Level Celebration Committee, were also handed Certificates of Appreciations. It may be mentioned that Konkani, Manipuri, and Nepali were added in the 8th schedule by the 71st Amendment Act of 1992.