Addressing the media, N. Biren stated that the new Government, in recognition of the trust of the people of Manipur, aimed to strengthen Citizen-centric governance 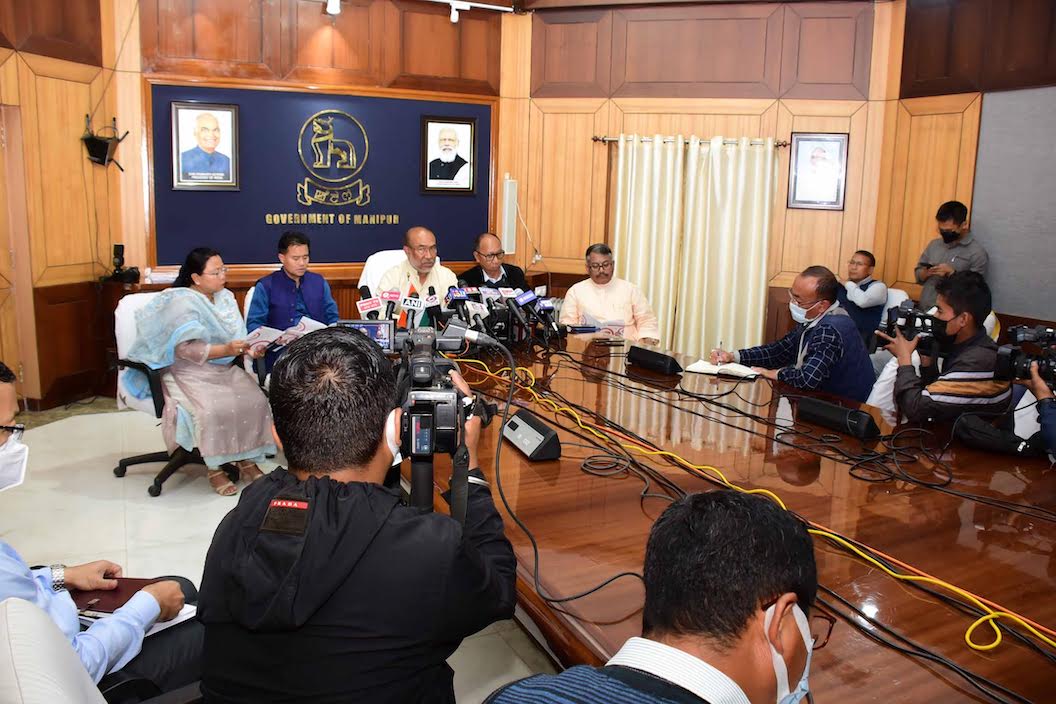 Imphal:Chief Minister N. Biren Singh announced the State Government’s Action Plan “100 Action Points For First 100 Days” in a Press Meet held at the Chief Minister’s Secretariat Saturday. The Action Points will provide momentum to the new Government to serve the people of Manipur effectively throughout the five years.

Addressing the media, N. Biren stated that the new Government, in recognition of the trust of the people of Manipur, aimed to strengthen Citizen-centric governance, fill gaps in critical infrastructure, frame policies for rapid economic growth and promotion of revenue generation and strive for inclusive development of the entire State.

Reading out some main points from the 100 Action Points, the Chief Minister informed that a Sub-Division Development Monitoring Mission would be launched for which designated Prabhari Officers would be appointed for regularly monitoring and competitive ranking of progress. Health Camps would be organised in each Block during the first 100 days.

He also stated that e-office would be introduced in all Government offices. The other important points included Inauguration of Solar Power System for Government Health Facilities in Tamenglong, Chandel and Churachandpur; Inauguration of Paid Private Ward with 18 rooms in Jawaharlal Institute of Medical Sciences; distribution of benefits to 16,000 beneficiaries under Manipur Old Age Pension Scheme; inauguration of 16 Model Anganwadi Centres; distribution of benefits to 10,000 beneficiaries under CM Widows Pension Scheme; formulation of Rani Gaidinliu Nupi Singi Scheme for Rs. 25,000/- incentive to girls from Economically Weaker Sections and other Backward Sections.

Elaborating on Sub-Division Development Monitoring Mission, the Chief Minister said that to ensure development reaches every person and every village, the Government is starting the mission. It will focus on transparent delivery of public services to the poorest of the poor in the area, inclusive growth, speedy implementation of government programmes in letter and spirit, accessibility of administration to the people and regular functioning of government offices in the Sub-Division.

Ranking of Sub-Divisions for performance against specified targets will also be developed. Prabhari Officers for each Sub-Division will be designated from among IAS, IFS and MCS officers. A Corpus Fund will also be created in Planning Department to meet the special needs of a Sub-Division which are otherwise not covered in any existing programme or project, he added. Moreover, the development of one product for every Sub-Division would be given focus, he stated

CM Biren also mentioned that the State Government, with an aim towards making Manipur ‘Corruption-free’, had reconstituted the ‘Anti-Corruption Cell’ in the Office of the Chief Minister.

The public can submit their complaints through multiple means, including ‘CM da Haisi platform, phone call, messages, written complaints etc. The ‘Anti-Corruption Cell’ would transfer actionable complaints to the competent authority and necessary action will be initiated by the concerned authority within 24 hours, he added.

The Chief Minister also sought public support and cooperation for successful implementation as the development of society needs the Government and the public to march together towards growth.