Over this representative of Lamlai A/C which is now vacant will also be inducted into the same Committee raising the total membership of the Hill Areas Committee to 29. 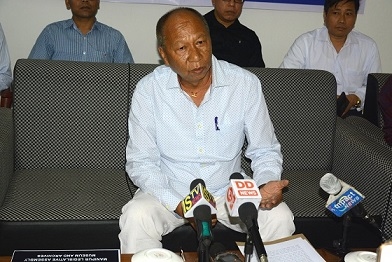 Imphal:  The Speaker of Manipur Legislative Assembly has inducted nine more members to the Hill Areas Committee, raising the total strength of the Committee to 29 as per an order issued on September 2, 2021.

The order follows a representation made by these eight MLAs to the Speaker of the Manipur Legislative Assembly citing a notification of Ministry of Home Affairs, Govt. of India, dated June 20, 1972; which states that the membership of the Hill Areas Committee, Manipur Legislative Assembly shall consist of all the members of the Assembly representing the Assembly Constituencies situated wholly or partly in the Hill Areas of Manipur, provided that the Chief Minister of the State and the Speaker shall not be members of the Hill Areas Committee.

The Speaker’s order further stated that “a careful and thorough examination of the representations submitted by the Hon’ble Members vis-a-vis the relevant provisions of the Constitution of India, the Presidential Order, 1972, the Delimitation of Parliamentary and Assembly Constituencies Order, 1976, was made; WHEREAS, conjoined reading of Article 371-C of the Constitution of India, Order issued by the President of India and also the Order issued by the Election Commission of India, in absence of any modification, supersession or annulment, it is crystal clear that a total of 29 (twenty-nine) Assembly Constituencies of the Assembly are wholly or partly situated in Hill Areas of Manipur as defined in the Presidential Order.”