For Tengnoupal District, it was held at the Conference Hall of the Deputy Commissioner, Tengnoupal. 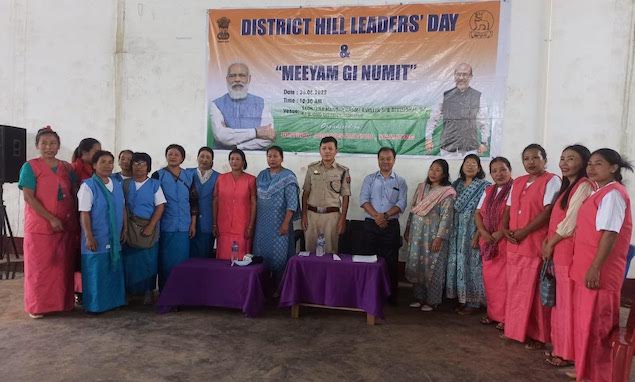 Imphal: The second “District Hill Leaders Day and Meeyamgi Numit” was held at various hill districts of Manipur on Friday.

For Tengnoupal District, it was held at the Conference Hall of the Deputy Commissioner, Tengnoupal.

DC Tengnoupal, Mannuamching, interacting with the village heads/chairman during the meet. She instructed all the district-level officers to do their best to entertain and expedite the issues related to governance in the district. For the Jal Jeevan Mission in the district, the DC instructed the concerned department to check if potable drinking is adequately supplied throughout the district.

A total of 19(nineteen) Departments open stalls to assist and to distribute beneficial schemes to the people. In today’s event –CAF & PD issued ration cards to 620 beneficiaries; issued 14 DPO/ICDS of PMMVY form and enrolled 47. For Aadhaar cards,  the Forest department distributed 626 saplings for planting, the Health department issued 20 CMHT cards, 30 of beneficiaries were screened and nine people were vaccinated, among others in the meet.

Deputy Commissioner, Additional Superintendent of Police, Divisional Forest Officer, Sub Divisional Officers, Tengnoupal/ Machi/ Moreh and other District Level Officers and officials of all the line departments of the district interacted and assisted the people who turn up for availing beneficiary schemes.

In Friday’s programme the Deputy Commissioner, Mayanglambam Rajkumar and SDOs of all the three sub divisions interacted with the village leaders and discussed their issues one by one. Applications of various issues related to developmental works and others were received for further necessary actions. As part of today’s program different departments like Health, Social Welfare, Agriculture etc rendered services to many individuals of the district. Institute like ITI Chandel has also seen opening spot admission for various ITI courses. Besides providing other services many people were administered Covid vaccines by the CMO team. Birth certificates, disability online registration, CMHA screening, PMJAY verifications etc were also done by the health department, till the report was filed the ICDS team was seen still working on the Aadhaar registration.

The program was attended by, SDOs, DLOs and other officials of the district.

In Kamjong district, the District Hill Leaders’ Day & Meeyam gi Numit was observed today at the Kasom Khullen sub-divisional headquarters. Organized by the District Administration, Kamjong, the program held at the Sadhavna Hall is the second observation of the district after the formation of the BJP-formed new government.

In the event that witnessed hundreds of public in attendance, the district level offices (DLOs) opened their mobile stalls to cater to the various demands and grievances of the public. Among the most active stalls were the CMO, ICDS, ZEO, MSPDCL, District Veterinary Office, District Forest Office, CAF & PD, SDO office etc.

The DC along with the Chief Medical Officer of the district handed over one CMHT Card and one PMJAY Card that were immediately processed on the spot to two beneficiaries. Also, the stall of the CMO was thronged by hundreds of public to get avail of the various free health-related services offered.

The stall of CAF & PD also issued ration cards to many beneficiaries on the spot. District Forest Office was another stall in great demand to the public as they distributed 1000 numbers of saplings of plant species such as Yongchak, lemon, Leihao, Jamun, Heirangkoi, jackfruit, etc to the public.

On the sidelines of the event, DC Shri Rangnamei Rang Peter stressed the importance of such an event, especially in a remote district like Kamjong, where public face inconveniences to reap benefits arranged by the government. He also thanked the government officials of the district and the public for making the event a grand success and added that the next Hill Leaders’ Day and Meeyamgi Numit will be held at Phungyar sub-division.

In Kangpokpi, the District Administration Kangpokpi organised District Hill Leaders’ Day and Meeyamgi Numit for the second time with 43 line departments at Sadbhavna Mandap in Kangpokpi Headquarters. All together 5957 services were delivered and 37 applications /grievances were received during the programme which began from 9 am onwards.

Deputy Commissioner, Kangpokpi, Kengoo Zuringla, directed all the District Level Officers of the various departments to guide the public and dispose off their grievances at the earliest. Further, she also interacted and heard the grievances of the public.

Apart from this, 9 complaints were received and disposed off today itself while 6 bank-related complaints are yet to be disposed off along with the target date of disposal.