The BJP won three of the four Assembly seats where by-polls were held on June 23. The votes were counted on June 26. 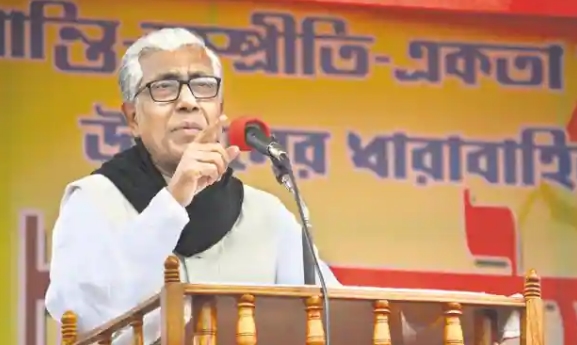 Agartala: The Leader of Opposition and Tripura CPI-M stalwart Manik Sarkar on Tuesday dubbed Chief Minister Dr. Manik Saha as “CM of the proxy vote” and said he totally failed to tackle the hooligans affiliated to the BJP in the state.

“Saha won Bardowali (Assembly) by-election through massive rigging of votes and by preventing over 11 thousand genuine voters. There was large-scale poll manipulation, violence, and snatching away of the voters’ identities. However, we expect some positive actions from him to erase the proxy tag and restore democracy in the state,” Sarkar pointed out.

He alleged that after his victory in the by-poll, Saha has failed to control the “unruly cadres” of his party who have been unleashing violence, attacks, and atrocities on the opposition supporters for the last three days.

The BJP won three of the four Assembly seats where by-polls were held on June 23. The votes were counted on June 26.

“But there has been no action. After his elevation as Chief Minister and his victory in the by-election, BJP-backed miscreants have continuously been perpetrating criminal acts on the opposition,” he claimed.

“The elections were held in four constituencies of Tripura, but the BJP-backed miscreants have been assaulting and destroying the properties of supporters of the CPI-M and other opposition parties in multiple locations of all eight districts and the government is silent,” he stated.

He alleged that the “miscreants” attacked two houses in this capital city on Monday night amid the promulgation of prohibitory orders under Section 144 of the Criminal Penal Code.

Gaur Kumar Bhattacharya, a member of CPI-M’s Sadar sub-divisional committee was attacked and five others including two women in the family were assaulted and the house ransacked, he claimed.

According to Sarkar, the same group of miscreants later attacked another CPI-M supporter Hiralal Das in the locality and vandalized his house. Despite specific cases, nobody has been arrested yet.

“A large-scale violence took place during this by-election where CPI-M party supporters and workers were attacked brutally and their properties were damaged by the “BJP-backed goons” and finally at the behest of the administration the entire polling was turned into a farce,” Sarkar alleged.

He accused the BJP cadres of not allowing voters to cast their votes.

“Instead they gave false votes/and then carried out attacks on the voters, What is going on? There is nothing to say – where is the government? The Chief Minister Manik Saha has won the electoral battle by large-scale proxy voting,” Sarkar added.