A person who identified himself as MD Fakharuddin Ali Hamad (44 yrs) son of MD Baseruddin Kwakta resident of Ward No. 1, Bishnupur District, was detained for verification. 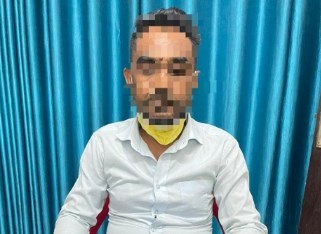 Imphal: Based on information about the movement of some transnational gang members along NH-2, random checking was conducted by a team of NAB Manipur at the North AOC area at about 7:00 pm on September 30.

A person who identified himself as MD Fakharuddin Ali Hamad (44 yrs) son of MD Baseruddin Kwakta resident of Ward No. 1, Bishnupur District, was detained for verification.

He revealed that he belonged to a transnational gang of which smuggles gold and drugs from Myanmar to other states of India through Manipur. He also revealed the identity of his gang leader and other members. He further stated that under the command of the gang leader he had smuggled gold and other illegal items like contraband drugs from Manipur to other states many times before.

The detained person was further verified and on thorough checking of his body 14 suspected gold biscuits were found concealed inside his socks. Besides, many incriminating photos and messages including photos of gold biscuits and illegal drugs were found in his WhatsApp application which were sent by the gang leader and associates in his mobile phones.

It is suspected that this yrans-national Gang has been smuggling huge quantities of illegal gold and contraband drugs from Myanmar to various parts of India. The suspected 14 gold biscuits, weighing about 2.3 kg and 2 mobile phone handsets were seized from his possession.