Love in time of war: Russian boy, Ukrainian girl get their marriage registered in India 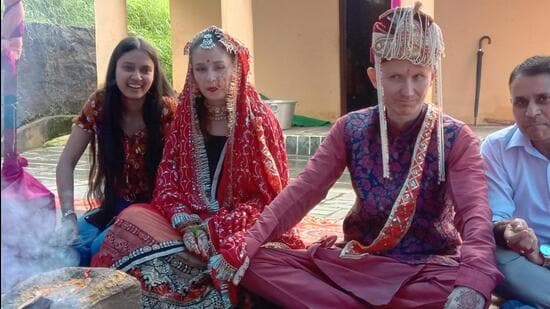 Dharamshala: Amid the ongoing military conflict between Russia and Ukraine, Sergei Novikov, a Russian settled in Israel, married his girlfriend Elona Bramoka from Ukraine last month at Divya Ashram Kharota near Dharamshala in Himachal Pradesh according to the traditions of Sanatan Dharma but on Monday the couple got their marriage registered in the SDM office at Dharamshala.

Sergei Novikov and Elona Bramoka were in a relationship for the past two years and despite the fierce war between Russia and Ukraine, the couple decided to solemnize their marriage for which they selected Dharamshala.

Pandit Sandeep Sharma of Divya Ashram Kharota said that Sergei and Elona were staying at Dharamkot near Dharamshala for the past one year.

“Our Pandit Raman Sharma solemnized their marriage and told them about the importance of marriage as per the traditions of the Sanatan Dharma,” he said.

Vinod Sharma and his family performed the marriage rituals, including the ‘kanyadan’ of Elona.

She said that it was a marriage in presence and with the blessings of Shiva Vishnu and others and she was happy with the marriage as per sanatan dharma.

Sergei Novikov was also happy to get married here under Hindu Culture with the blessing of God..

Shilpi Beakta SDM Dharamshala confirmed that their marriage has been registered and 40 marriages have been done by the foreigners here.

Even the foreign tourists staying in Dharamkot performed and enjoyed all the marriage rituals when they were married last month.

Sergei and Elona were happy today and thanked the people of this hill town for participating in their marriage.

Even the foreign tourists staying in Dharamkot performed and enjoyed all the marriage rituals.

Sergei and Elona said that they took keen interest in the hymns being recited by Pandit Raman Sharma who with the help of a translator made the couple understand the meaning of every “mantra” being recited by him on the day of their marriage.