Though all MPs supported the bill, some opposition members alleged the bill was brought in with an eye on the Tripura elections. 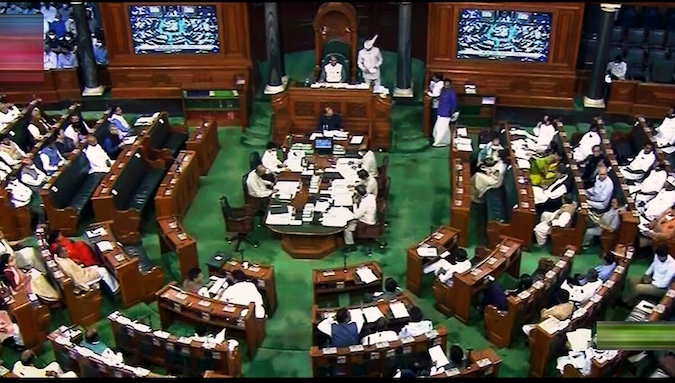 New Delhi: The Lok Sabha on Monday passed the Constitution (Scheduled Tribes) Order (Amendment Bill), 2022, to include the Darlong community of Tripura in the Scheduled Tribes list of the state.

Though all MPs supported the bill, some opposition members alleged the bill was brought in with an eye on the Tripura elections.

Piloting the bill in the Lok Sabha, Tribal Affairs Minister Arjun Munda said his ministry is focusing on education and welfare of the tribal people, including those who stay in far off places, keeping in mind their traditions.

He said the bill is aimed to ensure that people who have been cleared by the state government are included in the ST list, and that their tribal character is maintained. He said in Tripura, the Darlong, a sub caste of the Kuki tribe, were left out, and the bill is to do justice to the Darlong community.

He said from 2014, the Modi government has been taking decisions, forming policies and allocating funds at different levels for the welfare of the ST community. “The Indian government is committed to the welfare of tribals and tribal areas. The nation’s welfare is not possible without their welfare and upliftment,” he added.

He also said that 36,000 villages, which have more than 50 percent tribal population, are being given priority in the PM Adarsh Gram Yojana scheme, which seeks to improve their socio economic status.

Referring to the Har Ghar Jal scheme, he said the Jal Shakti Ministry is working to bring potable water via taps to the homes of people in the recognition that most illnesses occur due to lack of drinking water. Pradyut Bordoloi of the INC from Assam questioned the government’s intention behind bringing the bill.

“What is intriguing behind getting the bill passed, is because Tripura is going to elections, and the government is a past master of election measures. The government is hoping to reap the political benefits,” of getting the Darlong community included in the ST list, he said.

He also said that mere recognition as ST is not enough and the government must allocate funds for their betterment. He said the NiTI Aayog has said that it is mandatory to allocate funds proportionate to the tribal population, which is not being done.

Tapir Gao of BJP from Arunachal Pradesh thanked the Modi government for bringing the bill, and urged that in Assam the Karbi Anglong Autonomous Council get the promised financial assistance.

He said the Modi government last year included 12 tribes of Arunachal Pradesh in the ST list, which was happening 75 years after independence. “There are jungles near where the adivasis live, and it is interlinked to their lives, and there is need to look after the jungles,” he said adding that the Darlong community was getting recognition after 75 years.

A Raja of the DMK said it is shameful that after 75 years the country is still conducting exercises to see who can be brought under ST. He demanded a holistic exercise be held to bring all those communities left out under the bill’s ambit and not piecemeal exercises as the current bill.

He requested for inclusion of the narrikurava and the kurumbas community of Tamil Nadu in the list. PP Mohd Faizal of the INC from Lakshadweep said that in the Lakshadweep 3,000 children are left out of the list as only either of their parents are in the ST, while the government demands that both parents should belong to the ST to get the benefits.

“These children are left with no future, no employment, no reservation benefits, he said.