A traffic update notification said due to incessant rain a pillar of Balason Bridge at Matigara has been badly affected. 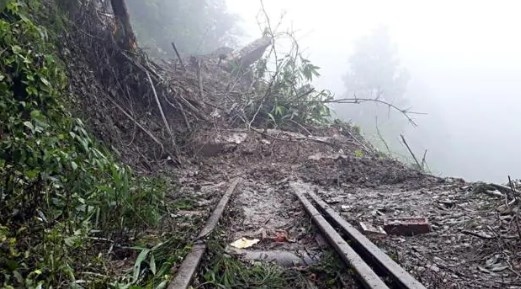 Siliguri: Sikkim’s law enforcing agencies have rescued hundreds of stranded tourists and local people when they got stuck in some 150 vehicles on Jorethang Melli highway.

The highway was blocked at multiple stretches in South Sikkim following incessant torrents, while the turbulent Teesta overflowed NH 31 in eastern part of Sikkim disrupting life in major parts of Darjeeling hills.
In fact landlocked Sikkim and major parts of Darjeeling district were cut off from the rest of the country due to series of landslides on NH 31A and NH 10.

A traffic update notification said due to incessant rain a pillar of Balason Bridge at Matigara has been badly affected.

” Taking into consideration the safety of the citizens, movement of traffic over the bridge has been temporarily suspended,” an official notification said.

” Only two-wheelers and pedestrians would be allowed to cross the bridge. All three wheelers and above vehicles coming from Bagdogra side are requested to take a right turn from Shivmandir underpass and take the Naukaghat road. All vehicles going to Bagdogra from Siliguri, Darjeeling Kalimpong, Duars and Sikkim are requested to take the Eastern bypass Road or Hill Cart Road and Burdawan Road to reach Naukaghat and take the Kawakhali/ NBMC road to reach Shivmandir and Bagdogra side, ” it added.

Additionally vehicles going to Bagdogra from Darjeeling, Mirik & Kurseong side are advised to take Gadidhura, Panighata, Bengdubi route for quicker and safe travel.

”All are advised to avoid NON ESSENTIAL TRAVEL as much as possible & until the weather improves,” the notification further said.

Life in the Darjeeling hills, Terai and lower region of Dooars have been affected following rains triggering landslides at many places.
Many homes were flattened owing to landslides, however, there had been no report of any casualty so far.

Official sources said landslides occurred at Algara -Lava road at 18 sites. GREF, Forest dept are working continuously to remove them. It is expected the roads would be cleared towards Algara side by afternoon.

Due to heavy rainfall yesterday, the following damage has been reported till now:

1. There is landslide in NH 55 at Mahanadi (Kurseong to Sukna)..However Rohini Road, Pankabari road is open for traffic.
2. There is landslides at Pokhriabong to Sukhiyapokri, Ghoom to Bijanbari Roads. Clearance will be started shortly.One small bridge has collapsed in Maneybhanjyang to Rimbick road.
3. A small slip observed in Balason Bridge at NH 31. Vehicle traffic has been restricted in this bridge until thorough inspection. Traffic is being diverted through Noukhaghat More.
Roads status under KALUK SD:-
1)Numerous slips along Kaluk-Dentam road .Blockage at Km -7 for heavy vehicles due to number of boulders fallen from hill side.Labours & machine will be engaged for clearance.
2)Singshore diversion blocked along Dentam -Uttarey road.Contractor has been informed for the same .
3)Rest all clear as of now except few of the FWR’s.
Reshi-Rinchenpong road blocked at Km-13 ch-26,27 & Km-17 just now with slip & slushy mud under KALUK SD.Blocked for all types of vehicles.Labour’s on the way and machine will be marched asap.
West Sikkim
1. Reshi Nayabazar road blocked at Rungdung near Sisney petrol pump.
2. Dentam Uttarey road blocked near Singshore bridge.
3.Heegoan to Chayatal road blocked at chourasta.
4. Gyalshing to Sakyong road blocked near Gyalshing bazar.
Rest all roads are clear/jeepable under west district.
No natural calamities have been reported till time in the district.
Sitrep peaceful.
DPCR / west.
1.Numerous slips along Sombaria- Nayabazaar road. Blockage at Bojeck.
2. Sombaria-Soreng road blocked at Gaythang-Tareybhir
3. Minor slips along Sombaria-Okhrey road
4. Sombaria- Piuraytar open for LMV only.
Road status of south district
1.Namchi to Melli vai kitam road blocked at Allaykhat.
2)Namchi to jorethang road blocked at Denchung alternative route vai Assangthang clear.
3)Namchi to Namthang road blocked at viewpoint.
4) Namthang to Rangpo road blocked at Narakjhora.
5) Ravangla to Yangang road blocked at Gaguney.
6)Hingdam to Tashiding road blocked at Gundruke y.
7) Jorethang to Melli road blocked at thuloo golai
8) Namchi to Damthang road blocked at sanduptse fatak.
9) Ravangla to Singtam vai Temi Terku road clear.
10) Ravangla to legship clear.
11) Yangang to Singtam road clear.
12) Temi to Singtam road clear.
Rest all road are clear/jeepable.
Sitrep peaceful.
DPCR /South
Pakyong subdivision
1) rorathang rongli closed due to many major and minor slips .
2) Assam pakyong road closed due to many major and minor slips.
3) Lall Turning basilakha road closed due to slide.
4)pakyong machong rolep chujachen road closed due to many major and minor slips .
5) pakyong mamring road closed at pachey khola due to minor slip.
6) bega Turning Bering road closed.