Since 1996-97 LDA has identified more than 70 villages as immediate catchment areas. Out of this, 48 have already been covered under catchment areas treatment work with active participation of the local communities 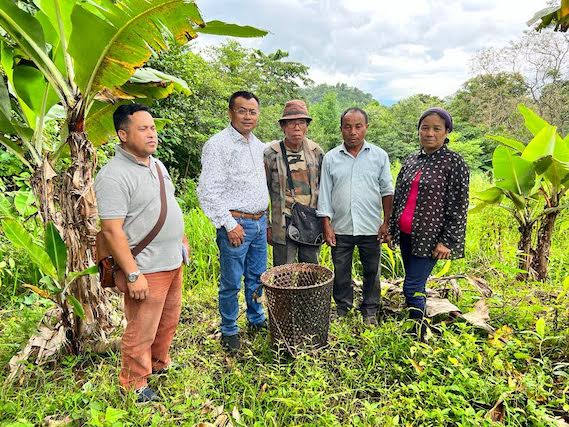 Imphal: Loktak Development Authority Chairman, Moirangthem Asnikumar Singh, Saturday visited the villages along the Nambol River and Maklang River catchment areas to assess the various afforestation, aided regeneration and cultural operations undertaken by the authority as part of the activities related to the preservation of Loktak Lake.

Attributing the success of the catchment area treatment programme to the dedication of the villagers and continuous guidance of LDA officials/ scientists, Chairman M Asnikumar Singh said, “The success of the catchment treatment programme and the remarkable change in the landscape would not have been possible without the support of the community and the dedication of LDA staff, especially our scientists.” He also added that the Catchment area’s treatment work is one of the top priorities for the conservation of Loktak Lake and its associated wetlands.

“Since 1996-97 LDA has identified more than 70 villages as immediate catchment areas. Out of this, 48 have already been covered under catchment areas treatment work with active participation of the local communities” the Chairman further stated.

During the visit today, the Chairman and scientists of LDA interacted with Village Chiefs/Woman representatives of the said catchment villages. The villagers expressed their sincere gratitude to the LDA for carrying out such conservation measures, extending livelihood and has made it possible for them to live in an area with mass forest cover as earlier the area was a barren land with water scarcity.

The villagers added the success of the catchment area treatment programme has played a huge role in solving the problems of water scarcity and the subsequent improvement in groundwater level has led to successful fruits and vegetable plantations which in turn have proved to be a viable source of income. They also requested Chairman LDA to continue to support livelihood activities so that deforestation and jhum cultivation could cease forever.

After completion of the compilation of the report, it will be submitted to the Chief Minister of Manipur and other stakeholders/departments for their perusal and consideration. He added that all possible efforts and steps are being taken up to ensure that the catchment areas treatment work in the remaining 22 villages is commenced as soon as possible with the support from the Chief Minister and other stakeholders/departments in a phase wise manner.

Lastly, Chairman LDA appealed to all the villagers of the catchment area to extend their active participation and full cooperation in the state’s conservation mission of wildlife, forests and wetlands under the able leadership of the ‘People’s CM’ N. Biren Singh.