Director General of Police, DGP, Manipur Paotinmang Doungel, said that organizing such tournaments as a mark to honor and commemorate our brave heroes is really encouraging 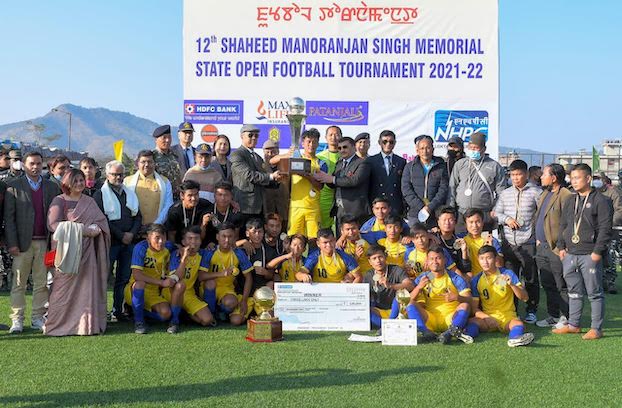 Speaking as chief guest, Director General of Police, DGP, Manipur Paotinmang Doungel, said that organizing such tournaments as a mark to honor and commemorate our brave heroes is really encouraging. The sacrifice made by Shaheed Manoranjan for the motherland will remain in the hearts of the people forever. It is also a pride for the state to have organized such events by encouraging sport talents of the state, he added.

Altogether 24 top teams from across the state participated in the tournament which started from January 8, 2022. The closing function was also attended by IGP, CRPF, Manish Kumar Aggrawal, DIG Ravindra Singh Rautela and officers from CRPF and Manipur police, mother of Shaheed Manoranjan Singh Ng. (O) Memcha Devi and family members and others. The tournament was organised by143 Bn CRPF and Imphal West Football Assn. under the aegis of AMFA.It may also be mentioned that in order to honour the brave son of the soil Shaheed Ng. Manoranjan Singh and to keep his memory alive, Shaheed Manoranjan Singh Memorial State Open Football Tournament is being organized since 2010. Shaheed Manoranjan was awarded Police Medal for Gallantry (Posthumously). He sacrificed his life during an operation against Maoists as an Asst. Commandant at Singhanmadgu village, Dantewada district in Chhattisgarh in 2009.