Speaking at the function MLA Surjakumar said that the game of Kho-Kho is popular in the rural areas especially Khangabok and the adjoining areas. 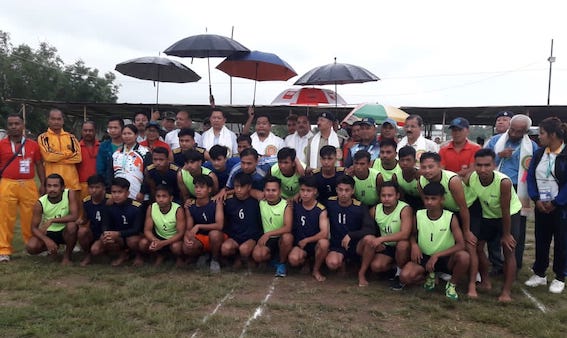 Thoubal: As part of the 2nd Manipur State Olympic Games -2022, which was inaugurated Friday by the Governor of Manipur, La Ganesan, the game of Kho-Kho and Mukna competition was formally inaugurated by MLA Khangabok AC, O.Surjakumar Singh at Basu ground, Khangabok.

Speaking at the function MLA Surjakumar said that the game of Kho-Kho is popular in the rural areas especially Khangabok and the adjoining areas. These areas produce the maximum number of players in Manipur for the game. He urged the state government to start functioning the indoor stadium at Thoubal Kshetri Leikai so that the players from the district can be accommodated.

Deputy Commissioner Thoubal A.Subhash Singh, in his presidential speech, said that the District Olympic Association will organize the game successfully for the players. He said that a game like Kho-Kho is a team game, and the players should have discipline and team spirit. The players should cooperate with one another.

He appealed to the players to follow the rules of the game and play free & fairly. He thanked the Education department for providing accommodation to the players. He also urged the organizing committee to keep the schools neat & clean as normal classes will resume when the players leave the school.

Thirteen teams from different districts are participating in the competition.