The road was put through for vehicular traffic after three days on Monday following the clearance of snow on the road. 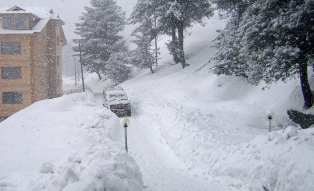 Srinagar: The upper reaches of the Kashmir Valley experienced yet another spell of snowfall while parts of the plains were lashed by rains, resulting in the closure of the Mughal Road and the Srinagar-Sonamarg-Gumri (SSG) road on Wednesday.

The Meteorological Department forecast widespread light to moderate rain, snow and traces over Jammu and Kashmir in the next 24 hours as well as scattered light rain and snow on November 10.

The road was put through for vehicular traffic after three days on Monday following the clearance of snow on the road.

The Srinagar-Sonamarg-Gumri (SSG) road connecting Ladakh was also closed due to fresh snowfall on Zojila axis.

The Border Roads Organisation (BRO) has launched a massive snow clearance operation at Zojila Pass and other checkpoints including Gumri, India Gate, Capt Mode and Ranga Mode to make the highway traffic worthy.

Reports of snowfall were also received from the Peer Panjal mountain range, Chandanwari, Pisso Top, Sheshnag and at the holy cave shrine of Amarnath in south Kashmir.

Gulmarg experienced a low of minus 2 degrees Celsius overnight while the maximum temperature was recorded 1 degree Celsius on Wednesday.

Srinagar and its adjoining areas were lashed by rains this morning disrupting the normal activities. The minimum temperature was recorded 5.4 degrees Celsius on Wednesday.

Overcast weather conditions prevailed in major parts of the Kashmir Valley that intensified cold all across on Wednesday.