While the Congress discussed promoting younger leaders at the meeting, also absent was Gujarat Congress working president Hardik Patel, who as per sources was not among the invitees. 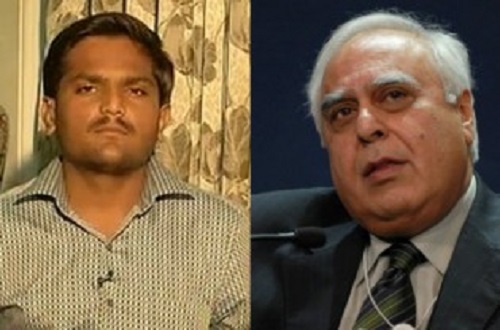 Udaipur: As the three day CWC meet started on Friday, senior party leader Kapil Sibal, who has more than once aired his grievances against the party in public, was among those missing.

While the Congress discussed promoting younger leaders at the meeting, also absent was Gujarat Congress working president Hardik Patel, who as per sources was not among the invitees.

Sibal, a senior party leader and former union minister, is said to be miffed due to a protest staged by some Congress workers outside his house in Delhi in September last year, after he said they knew, yet did not know who was taking decisions as there is no elected president in the party.

According to sources, Sibal, an eminent lawyer, has been offered a Rajya Sabha seat by a party which is an ally of the Congress.

Hardik Patel, who was made a Working President of the party in 2019, was also missing.

Asked about Patel not attending the meet, Congress leaders evaded any direct reply. It was not clear if he was invited or not, but a source said working presidents were not eligible for invitation. However, Congress leaders have said around 50 leaders, who do not hold any post, have also been invited to the meet.

Patel had recently dropped ‘Congress’ from his Twitter bio, amid speculations that he may quit the party. He had also claimed that leaders of the party’s state unit were ‘harassing him’, and praised the Bharatiya Janata Party (BJP) for its “decisive” leadership.

Former prime minister Manmohan Singh also could not attend the meeting due to health reasons.

The three day Nav Sankalp Shivir of the Congress started on Friday. The discussions will continue on Saturday, and on Sunday, the Congress will come out with its ‘Udaipur Declaration’ charting a future roadmap.