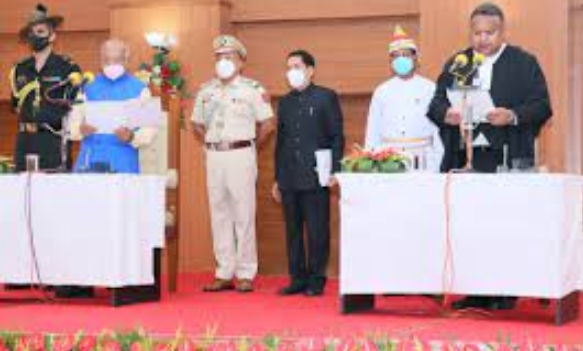 Agartala: Tripura Governor Satyadev Narayan Arya on Tuesday administered the oath of office to newly appointed Chief Justice of the high court of Tripura Indrajit Mohanty in a simple ceremony.

Based on the recommendation of the Supreme Court collegium, the Law Ministry recently has transferred chief justices of five high courts besides elevating eight judges as chief justices of various high courts. Justice Mohanty arrived on Monday soon after the departure of Justice Kureshi and took charge on Tuesday.

According to the report, Justice Mohanty is the sixth Chief Justice of Tripura. Justice Kureshi, one of the senior-most high court judges in the country but didn’t elevate to a judge of the apex court yet. Instead, transferred to a bigger high court from Tripura.

Kendrapara:The decomposed body of a male 17.8 feet long male estuarine crocodile was fished out by the forest personnel...
Nation