There are lots of tales, and mythological beliefs associated with the hills and places on the way to Athu-Popu, which enthrall anyone, the sources said. 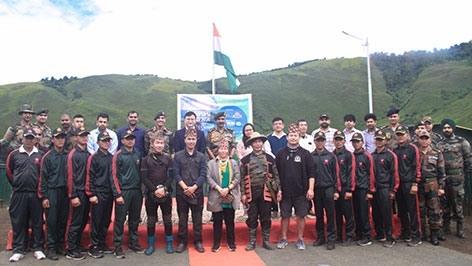 Itanagar: The second edition of a joint civil-military religious trek to Athu-Popu, one of the sacred places of the Idu Mishmi tribe of Arunachal Pradesh, was flagged off jointly by the Army and civil dignitaries on Monday from Anini, the headquarters of Dibang Valley district.

The 17-day joint civil-military trek has been organized by the Indian Army in coordination with the Dibang Valley district administration for promoting religious and adventure tourism, official sources said on Tuesday.

Altogether 29 civilians, including seven female members of the Idu Mishmi community, are participating in the trek along with the Spear Corps of the Indian Army and they would be paying reverence at the holy site, which has special significance in the Idu Mishmi tribe.

The trek would be completed in 17 days along a challenging and scenic route and will promote religious and adventure tourism in the area, the district information, and public relations officer said.

The Idu Mishmi tribe believes in life after death. According to their mythology, after death, the soul of a person makes a journey guided by their priest (Igu or shaman) to attain a new life and Athu-Popu is one of the holy places where the departed souls take rest on their journey towards eternity. At this sacred place, a big mass of stone stands alone, and it is believed that the priest Sinerwu once cried on this sacred stone on getting the news of his mother’s death. The stone still bears the impression
of the priest’s palms and his tears, as believed. There is also a wild paddy field near Athu-Popu, believed to be cultivated by the departed souls on their onward journey.

Athu-Popu, with an altitude of about 3500 metres above sea level, is situated at Kayala Pass on the Indo-China border and is approximately 120 km from Maliney, the last motorable village in the Dibang Valley district which is at a distance of about 200 km from Roing, HQs of neighboring Lower Dibang Valley district. There are lots of tales, and mythological beliefs associated with the hills and places on the way to Athu-Popu, which enthrall anyone, the sources said.