Journalist succumbs to Covid in Manipur

Shaiza, a resident of Ukhrul district leaves behind his wife, three daughters and two sons. 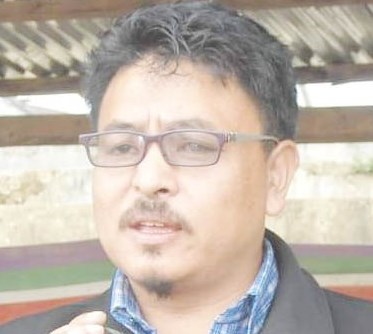 Imphal: A reporter of The Aja Daily, Thotshang Shaiza (52) passed away due to COVID-19 complications at JNIMS, Imphal on Saturday night, it was reported here on Sunday.

Shaiza, a resident of Ukhrul district leaves behind his wife, three daughters and two sons.

The Manipur Hill Journalists’ Union expressed deepest sorrow and grief to the bereaved family and prayed that God Almighty give strength to bear this great loss.

The Ukhrul District Working Journalists’ Association (UDWJA) said it was deeply saddened by the sudden and untimely demise of its advisor, former president and senior journalist Thotshang Shaiza .

The senior journalist succumbed to Covid-19 complications as he developed severe lung infection. He was referred to JNIMS from Ukhrul District Hospital on June 10 after his condition worsened. Shaiza tested positive for Covid-19 on June 4.

Mr Shaiza is the third journalist in Manipur to have succumbed to COVID-19. Earlier Sagolshem Hemant, former president of All Manipur Working Journalists’ Union, died on May 30, while Saikhom Shantikumar Singh, a sub-editor of Ireibak, died on June 6 last.