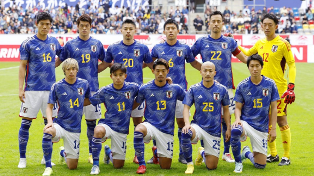 Only six players are from Japanese first-division teams. German clubs have contributed the most players for Moriyasu’s side with seven from Bundesliga, including the captain Maya Yoshida who will play his third World Cup.

There are two players from English Premier League, three from French Ligue 1, and one from Spain’s La Liga.

“There are really lots of players in all positions that could have been picked,” Moriyasu said at a press conference. “It was extremely difficult.”

He said that Japan’s goal is to reach the quarterfinals for the first time.

“I know it is not an easy target but with the support of our fans, I think we can achieve it,” he said.

Japan, which has been drawn in Group E with Germany, Spain and Costa Rica, needs a miracle to go that far. Costa Rica reached the last eight at the 2014 World Cup in Brazil.

Moriyasu’s side will fly to Doha on Nov. 11 and play their last warm-up game against Canada on Nov. 17 in Dubai, before opening their World Cup campaign against Germany on Nov. 23.

Following is the squad: