He was addressing the inaugural function of Invest Karnataka 2022, the Global Investors Meet via video conferencing. 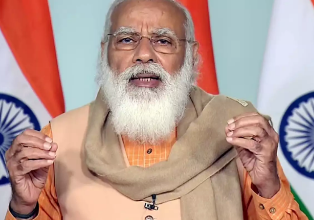 New Delhi: We are cementing our fundamentals to ensure a stronger economy, Prime Minister Narendra Modi said on Wednesday, adding that instead of ‘red tape, his government has created an environment of ‘red carpet for investors.

He was addressing the inaugural function of Invest Karnataka 2022, the Global Investors Meet via video conferencing.

“Even in times of a global crisis, experts, analysts, and economists have hailed India as a bright spot… We are continuously working towards cementing our fundamentals to further strengthen India’s economy with each passing day,” he said.

He underlined that “instead of trapping the investors in the red tape, we created an environment of the red carpet for investment, and instead of making new complicated laws, we rationalized them”.

The Prime Minister said that bold reforms are carried out in every sphere of the government and building a New India is possible only with bold reforms and massive infrastructure.

“These are uncertain times, still most of the nations are convinced about the fundamentals of the Indian Economy. In this period of fragmentation, India is moving with the world and giving emphasis on working with the world. India could assure the world about the supply of medicines and vaccines in the period of the disrupted supply chain,” he added referring to the sense of global optimism towards India.

Modi said that despite a climate of market saturation, Indian domestic markets are strong due to the aspirations of her citizens.

Expressing delight at the organization of the investors’ meeting in Karnataka, the Prime Minister remarked that it is a perfect example of competitive and cooperative federalism.

He noted that manufacturing and production are majorly dependent on the policies and control of the state government.

“Through this Global Investors’ Meet, states can target specific sectors and forge a partnership with other countries,” he added.

The Prime Minister said that in the 21st century, from its current position, India has only to move forward. India received a record foreign investment of 84 billion dollars last year, he said.

He also said that steps like decriminalization of many company law provisions, faceless assessment, new avenues for FDI, liberalisation of drone rules, geospatial and space sector and defence sector are bringing unprecedented energy.

The Prime Minister said that the number of operational airports has doubled in the last 8 years and Metro has expanded in more than 20 cities.

The three-day programme, being held from November 2 to 4, in Bengaluru aims to attract prospective investors and set up a development plan for the next decade.

It would witness more than 80 speaker sessions. The speakers include some of the top industry leaders such as Kumar Mangalam Birla, Sajjan Jindal and Vikram Kirloskar among others.