Nothing went right for the losing side on the day as Tim Southee (2/26), Shivam Mavi (2/29) did the damage to the top-order while Varun Chakravarthy (2/26) took care of the middle-order in the latter half of the innings. 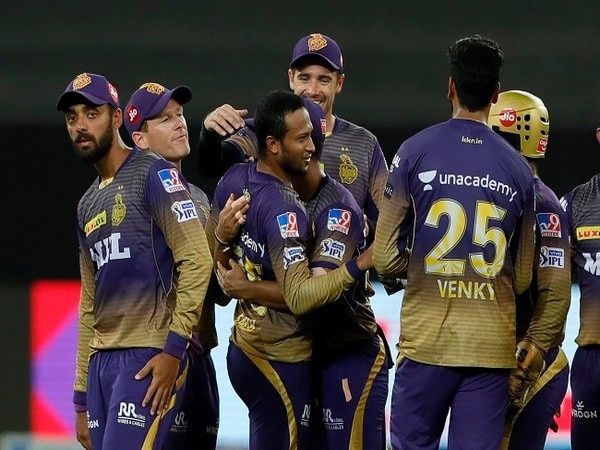 Dubai: Kolkata Knight Riders had to dig deep as they defeated bottom-placed Sunrisers Hyderabad with two balls to spare while chasing 116 on a tricky surface in match 49 of IPL 2021 here on Sunday.

After restricting SRH to 115/8, a patient half-century from Shubman Gill (57 off 51) ensured KKR’s sixth win of the season in 13 games, helping them put 12 points on the table. KKR remained fourth on the table with a match to go while Rajasthan Royals and Mumbai Indians (10 points each) will face each other soon to remain in battle for the fourth spot.
Sunrisers, on the other hand, are long out of contention and will have to be content with the bottom spot as they slumped to their 10th loss of the season.

Nothing went right for the losing side on the day as Tim Southee (2/26), Shivam Mavi (2/29) did the damage to the top-order while Varun Chakravarthy (2/26) took care of the middle-order in the latter half of the innings.

Among SRH batters, Kane Williamson contributed the most with a 21-ball 26 while Abdul Samad fired 25 off 18 on a surface that offered no pace.

Chasing 116, Shubman Gill and Venkatesh Iyer found it hard to get going with senior pacer Bhuvneswar Kumar (0/20) cramping the duo with a sharp line and length as KKR could only score 11 runs in three overs. Runs finally came in the fourth over with IPL debutant Umran Malik giving away 10 runs in his first over. Despite giving away runs, Malik registered the fastest delivery by an Indian bowler in the season at 150.06kmph.

Jason Holder soon provided the breakthrough by deceiving Iyer (8 off 14) through a change in pace. Rahul Tripathi (7 off 11) couldn’t hang around for long as well and fell in the seventh over to Rashid Khan, leaving KKR worrying at 38/2.

Alike SRH innings, KKR too struggled to clear the fence post Powerplays with the next 24 deliveries yielding no boundaries. It was Gill, who broke the monotony by hitting five fours in space of two overs to add much-needed pace to the chase.

Gill reached his half-century in the 15th over by smashing Malik through the deep mid-wicket for a boundary. KKR soon looked comfortable for a win with 24 runs needed in the last four overs.
However, Siddharth Kaul (1/17) gave SRH a look in by dismissing Gill for 57.
A set Rana (25 off 33) eased off the pressure by hitting a boundary in the next over but fell right after to Holder; leaving two new batsmen to chase 9 runs off 12 balls.

Dinesh Karthik (18* off 12), however, ensured the win by hitting Kaul for a boundary in the last over. Eoin Morgan carried his bat as well at 2 not out.