Insurgency, violence in NE have declined by 89%: Amit Shah

During the past three years, 9,600 cadres of different militant groups of NE surrendered along with arms and joined the mainstream. 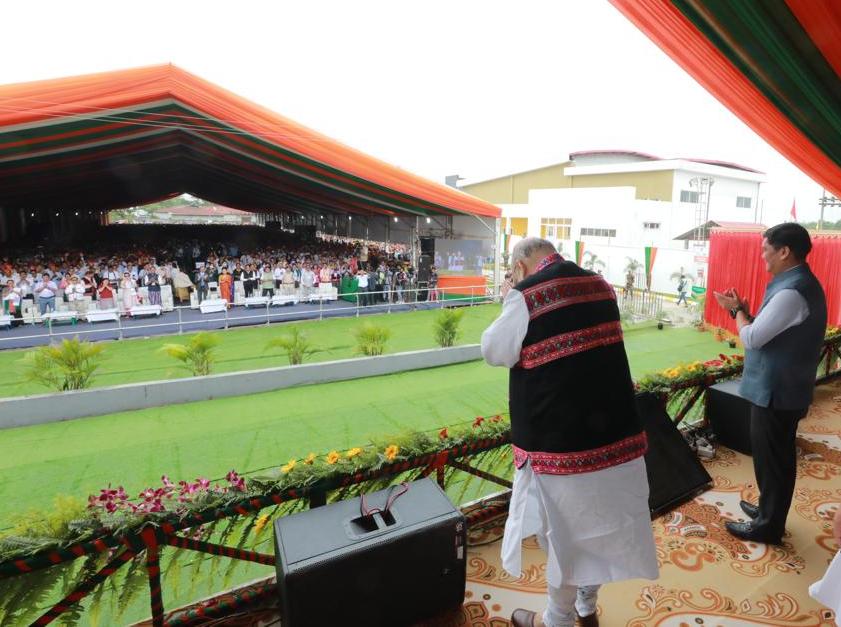 Itanagar: Union Home Minister Amit Shah on Sunday said insurgency, violence and rebellion in Northeast India has declined by 89 percent over the last eight years after the Narendra Modi-led government came to power at the Centre.

“In secure Northeast, the rate of rebellion and terrorism has decreased by 89 percent – a feat achieved by the Bharatiya Janata Party-led NDA government,” the Home Minister said in his address at a public meeting in Namsai on the second and final day of his two-day visit to Arunachal Pradesh.

Stating that the entire North East was known for disputes and militancy before 2014, he said, under Prime Minister Modi’s leadership, the Naga peace talks are going on, the problem of Bodoland has been resolved, and all rebel groups in Tripura, as well as Assam’s Karbi groups, have laid down weapons. During the past three years, 9,600 cadres of different militant groups of NE surrendered along with arms and joined the mainstream.

“The Northeast used to capture headlines due to militancy, terror, bullets and bomb blasts and deaths earlier. Today the whole country has come to know the Northeast because of its tourism, infrastructure development, its unique cultural diversity, etc”, Shah said.

The Home Minister, along with Arunachal Pradesh Chief Minister Pema Khandu, Union Law and Justice Minister Kiren Rijiju and others, launched more than 50 projects/schemes worth Rs 1180 crore. He inaugurated 22 developmental projects worth Rs 436 crore, laid the foundation for 25 other projects entailing an expenditure of Rs 350 crore and launched four different beneficiary-oriented schemes costing Rs 244 crore, benefiting a total of 33,466 families and 800 SHGs/NGOs. shah said many of these schemes will definitely help in bringing ‘light’ to people’s lives.

While stating that lots of development have taken place in Arunachal Pradesh (which is celebrating its Golden Jubilee year) in the last eight years, he took a swipe at the Congress and its leader Rahul Gandhi.

“Friends in the opposition Congress used to question what development did the Modi government bring in”, Shah quipped, “The one who wakes up with his eyes closed does he see development?.. Rahul Baba, ankh khol do, Italian chashma nikal do, Bharatiya chashma pehen lo, to malum padega ki aath saal ke undar kya hua (Rahul Gandhi, open your eyes and throw away your Italian glasses and wear the Indian ones then you would see what development did Modi bring in Arunachal and Northeast),” he said.

During these eight years, Pema Khandu and Narendra Modi’s double engine government has done a lot to boost Arunachal’s tourism, improve its law and order, and augment its infrastructure, which successive Congress governments could not do in 50 years, he claimed.

“For Modiji, the country starts with Arunachal Pradesh and that development should start from the ‘Land of Rising Sun’, he added.

Shah witnessed the exchange of the Memorandum of Understanding between Rashtriya Raksha University (RRU) and the State Government, and digitally inaugurated the transit campus of RRU at Pasighat. He said the RRU, apart from producing technicians for the country’s defence sector, will give trained manpower for military and paramilitary forces and open the floodgate for the Arunachal youths to serve in other parts of the country.

The Home Minister, who went to the holy site of Parshuram Kund on Saturday, said eastern Arunachal has immense potential to attract tourists and within the next 5-10 years Parshuram Kund will become a major pilgrimage centre, giving a major fillip to the hospitality sector in the region. With the Itanagar airport getting complete soon, days are not far when the train will reach Parshuram Kund, he said.

He also attended a security and development review meeting at Namsai and interacted with the personnel of the Army, ITBP, SSB, Assam Rifles, Border Roads Organisation (BRO) and National Highways and Infrastructure Development Corporation Ltd (NHIDCL) before leaving for the national capital.