According to sources, the injured Indian Army soldiers were airlifted from Tawang on December 9 afternoon and brought to Guwahati for treatment. 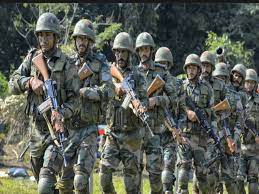 Guwahati: Six Indian Army soldiers were injured in a clash with the Chinese People’s Liberation Army in Tawang in Arunachal Pradesh on December 9, were airlifted and has been admitted in the Army 151 base hospital of Basistha, Guwahati.

According to sources, the injured Indian Army soldiers were airlifted from Tawang on December 9 afternoon and brought to Guwahati for treatment.

The Indian and Chinese troops clashed along the Line of Actual Control (LAC) in the Tawang Sector in Arunachal Pradesh on December 9.

As per reports, soldiers from both sides were injured in the clash.

On December 9, PLA troops contacted the LAC in Tawang Sector which was contested by their own troops in a firm and resolute manner. This face-off led to minor injuries to a few personnel from both sides.

Both sides immediately disengaged from the area.

This is the first reported clash between Indian and Chinese troops, since skirmishes in Eastern Ladakh.