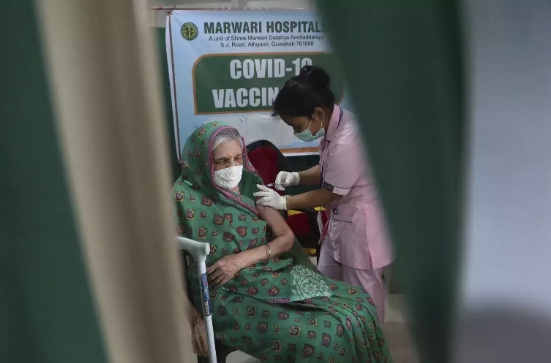 New Delhi: The cumulative number of COVID-19 vaccine doses administered in the country on Friday exceeded 9.43 crore, the Union Ministry of Health and Family Welfare said.

‘Eight states account for 60 per cent of the total doses given so far in the country,’ the Ministry said.

Over 36 lakh vaccination doses were administered in the last 24 hours.

Its daily new cases continue to rise with 1,31,968 new cases being registered in the last 24 hours.

According to the Ministry, ten states including Maharashtra, Chhattisgarh, Uttar Pradesh, Delhi, Karnataka, Kerala, Madhya Pradesh, Tamil Nadu, Gujarat and Rajasthan have shown a rise in the COVID daily new cases. 83.29 per cent of the new cases are reported from these 10 states.

Maharashtra has reported the highest daily new cases at 56,286, followed by Chhattisgarh with 10,652 while Uttar Pradesh reported 8,474 fresh infections.

Twelve States, as shown under, are displaying an upward trajectory in daily new cases.

Meanwhile, the total Active Caseload has reached 9,79,608. It now comprises 7.50 per cent of the country’s total Positive Cases. A net incline of 69,289 cases recorded from the total active caseload in the last 24 hours.

On the recovery front, 61,899 recuperations were registered in the last 24 hours, while the number of those who succumbed stood at 780, the Ministry’s data indicated.

Ten states account for 92.82 per cent of the new deaths with Maharashtra recording the maximum casualties at 376 followed by Chhattisgarh with 94 daily deaths.