President Gotabaya thanked the Indian Government and the Indian people for the assistance provided to the country. 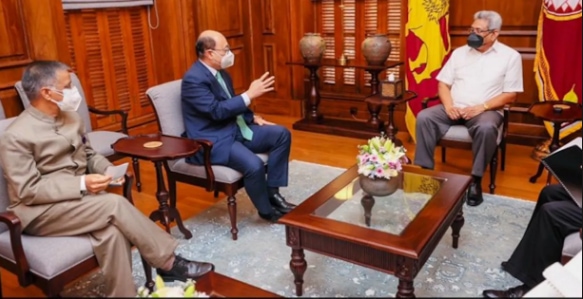 Colombo/New Delhi: A high-level delegation from India, led by Foreign Secretary Vinay Mohan Kwatra, is in Sri Lanka today and met with President Gotabaya Rajapaksa and Prime Minister Ranil Wickremesinghe, even as the island nation is grappling with a severe financial crisis.

“Reiterated Sri Lanka’s centrality to India’s #NeighbourhoodFirst policy. Both sides reaffirmed commitment to the development of India-Sri Lanka ties.”
The delegation reviewed the already provided assistance in terms of Fuel, Medicine, Fertilizer, and other essentials and said the Government of India is committed to supporting Sri Lanka.

President Gotabaya thanked the Indian Government and the Indian people for the assistance provided to the country.

On Wednesday, PM Wickremesinghe told the Sri Lankan parliament that a high-level government delegation from India is set to visit Sri Lanka for a discussion on possible further loan assistance.

“We have received up to four billion US dollars under the Indian credit line so far. More credit has been requested. But India can’t keep giving us loans. Even their assistance has a limit.

“We also need to have a plan in place to repay these loans. They’re not donations,” the PM said, noting that India too is dealing with its own crisis in the country’s banking sector.

Former Sri Lanka Central Bank Governor Indrajit Coomaraswamy said earlier in June that Sri Lanka could get as much as 6.0 billion dollars in “bridge financing” from India.

“India has agreed to give 4.5 billion dollars,” Coomaraswamy told an online forum organized by the central bank on June 2.

Earlier, Foreign Secretary Kwatra and the three senior Indian government officials arrived at the Katunayake International Airport in the morning.
The delegation touched down at the airport at 9:20 am by a special flight from New Delhi.

The Indian High Commissioner to Sri Lanka Gopal Baglay and other officials were present at the airport to greet the delegation.
The officials will wind up their visit and return to New Delhi in the evening.