The U-19 side has been training in Goa for the upcoming tournament. The head coach Alex Ambrose believes that the camp will help the girls to adapt better. 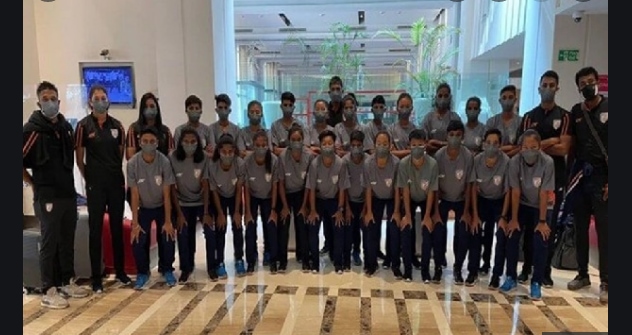 New Delhi: India women’s team on Wednesday left for Bangladesh to compete in the upcoming SAFF U-19 Women’s Championship later this month.

The U-19 side has been training in Goa for the upcoming tournament. The head coach Alex Ambrose believes that the camp will help the girls to adapt better.

“We have been training in Goa, and the girls have been adapting to all the situations here. It’s a tough time for everyone in the world and we got the opportunity to train and play for which I am happy. We certainly want to do well and the federation is supporting us so that we can live up to a certain expectation,” Ambrose said.

The Indian side is relatively new with only a few players who have already been in the national team. Ambrose opined that playing in the SAFF will help girls understand the level of football played at the international arena.

“It’s a new team and everyone is excited to play a good brand of football. Playing competitive teams will help acclimatise them, and gain an understanding of International football. The players need to believe in themselves and play well.”

“It will help the girls prepare themselves to deal with tough situations. Expectations are always there, but we are here to play good football. There is absolutely no pressure on the players. We just want them to perform well, enjoy their football and have a good championship,” he added.

India will face Sri Lanka, Bhutan, Bangladesh and Nepal in a round-robin tournament. The top two sides will face each other in the final, which will take place on December 22.