No prime minister has completed their term in Pakistan's political history, but Imran Khan is the first prime minister to be removed by a vote of no-confidence. 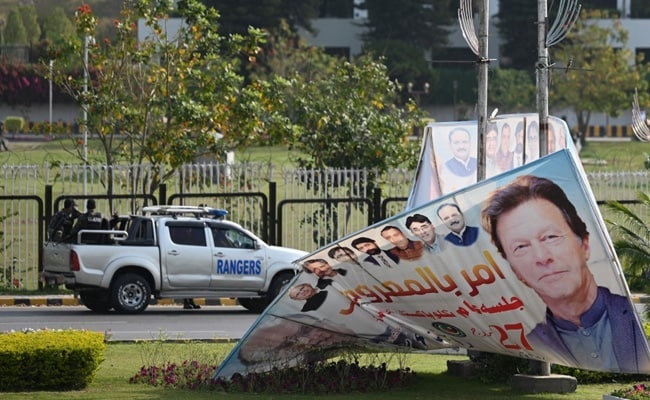 Islamabad: Pakistan Prime Minister Imran Khan was ousted from power with a united opposition voting to remove him, becoming the first Pakistani prime minister to be thrown out in this manner.

The opposition’s no-trust motion against Imran Khan succeeded an hour past midnight on Sunday, with 174 members in the 342-strong house voting in favour of the resolution. It required a minimum of 172 votes to pass.

Despite fighting with his back to the wall in a last minute attempt at clinging on to power, and waving the “letter” which he alleged proved that the US was behind the move to remove him, a determined opposition, backed by the Supreme Court, saw to it that the National Assembly went ahead with the no-confidence motion.

No prime minister has completed their term in Pakistan’s political history, but Imran Khan is the first prime minister to be removed by a vote of no-confidence.

Imran Khan was in power for three years and eight months. Anticipating his defeat, Imran Khan left the Prime Minister House for his Banigala residence before the vote was held. Nomination papers for a new Prime Minister will be filed on Sunday, the officiating Speaker Ajaz Sadiq said. Joint opposition candidate PML-N leader Shahbaz Sharif is to be the new prime minister of Pakistan.

The voting on the no-confidence took place after the National Assembly debated on the matter for more than 12 hours. The session was chaired by the Pakistan Muslim League-Nawaz’s Ayaz Sadiq — a member of the panel of chairs — after speaker Asad Qasier resigned from his post just as the NA convened around midnight on Saturday.

Sadiq then adjourned the session for four minutes since according to rules, the same session cannot continue past midnight. The session then resumed at 12:02am, with recitation of the Holy Quran. Following that, the voting process continued, with lawmakers confirming their votes by writing their name in a register placed near one of the assembly doors.

Earlier, the session, was adjourned multiple times before voting on the resolution could take place. The last adjournment was the fourth of the day as the opposition’s clamour for immediate voting fell on deaf ears amid lengthy speeches delivered by PTI treasury members on the floor of the house.

Speaking after the voting results were announced, PML-N President Shahbaz Sharif said the country was witnessing a new dawn and thanked all the joint Opposition leaders for their efforts in uniting the parties against the government.

“We thank everyone for their sacrifices, and now, once again, a Pakistan based on the Constitution and the law is about to come into existence,” the PML-N president said, hoping that the alliance would move the country towards progress.

“Neither I, nor Bilawal, nor will Maulana Fazlur Rehman interfere. Law will be upheld and we will respect the judiciary,” Shahbaz said, thanking Sadiq for chairing the historic session.

“I would like to congratulate the whole nation and this House, as for the first time in the history of the country, a no-confidence motion has succeeded and we have made history,” said PPP’s Bilawal Bhutto.

The PPP chairman recalled what had happened on April 10, adding that on this day, the country approved the 1973 Constitution. Before leaving, Imran Khan issued some last orders before bowing out.

Shahbaz Gill, who was the special assistant to Imran Khan on political communication, revealed on twitter that before leaving the office, Imran Khan ordered his principal secretary Azam Khan to report to the Establishment Division. Gill wrote that Imran Khan praised Azam Khan for his professionalism and acknowledged his services as he fulfilled his responsibilities with “utmost honesty and diligence.”

Calling him “Pakistan Khan”, Faisal added: “He has lifted the entire Nation. Feeling proud to be a Pakistani and blessed to have a leader like him. Pakistan Khan — Imran Khan”.

Imran Khan, 69, surged to power in 2018, but lost his parliamentary majority after allies quit his coalition government. Opposition parties accused him of failing to revive an economy battered by COVID-19 or fulfil promises to make Pakistan a corruption-free, prosperous nation respected on the world stage.